Of the three new singles debuting this week in 1991 that I write about, two of them were much bigger hits overseas, while the other one only registered a chart placing in Australia.  But before taking a look at these, I have updated some earlier posts with the following: 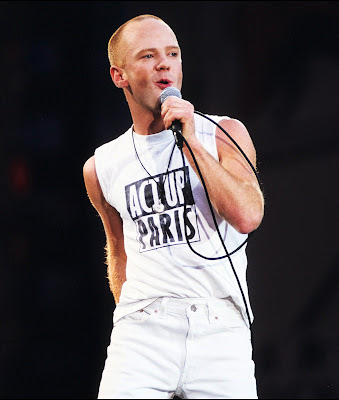 Jimmy Somerville's solo career was not very 'loved' by the Australian record-buying public.
Top 150 debuts:
Number 145 "Struck by Lightning" by Stray Cats
Peak: number 143
Peak date: 11 March 1991
Weeks in top 150: 3 weeks
Weeks on chart: 6 weeks
We saw American rockabilly group Stray Cats bubble under in July 1989.  "Struck by Lighting" was the second single from the band's sixth studio album Let's Go Faster (number 57, March 1991).  It followed "Cross of Love" (number 94, January 1991), which was Stray Cats' final single to dent the Australian top 100.
"Struck by Lighting" appears to have only charted in Australia, although only an Australian pressing is listed on discogs.  On the ARIA state charts, "Struck by Lightning" peaked highest in South Australia/Northern Territory, where it reached number 105.
We shall next see Stray Cats in April 1991.
Number 146 "To Love Somebody" by Jimmy Somerville
Peak: number 146
Peak date: 25 February 1991
Weeks in top 150: 1 week
Weeks on chart: 3 weeks
Scottish singer Jimmy Somerville graced our presence previously in December 1989.  As mentioned then, none of Jimmy's solo singles peaked higher than number 62 in Australia; he had much greater success locally as the lead singer of Bronski Beat and The Communards.
"To Love Somebody", a reggae cover version of a Bee Gees track, was released as a single to promote The Singles Collection 1984/1990 (number 114, February 1991), a compilation album covering Jimmy's solo work to date, as well as singles from The Communards and Bronski Beat that he sang lead on.
Internationally, Jimmy's version of "To Love Somebody" peaked at number 8 in the UK in November 1990.  It was also a top 10 hit in Ireland, the Netherlands, Austria and New Zealand, and a top 20 hit in Germany, France and Switzerland.
Locally, "To Love Somebody" had its greatest success in South Australia/Northern Territory, where it reached number 136.
We will next see Jimmy in 1995.
Bubbling WAY down under:
Number 176 "Get Here" by Oleta Adams
Peak: number 151
Peak date: 6 May 1991
Weeks on chart: 3 weeks
American singer Oleta Adams first bubbled under on the Australian chart in May 1990.  Earlier during the same month she did the same thing as a guest vocalist with Tears for Fears, with whom she landed her biggest 'hit' in Australia, with "Woman in Chains" (number 39, January 1990).
"Get Here", a song written and originally recorded by Brenda Russell in 1988, was the second single released in Australia from Oleta's third album Circle of One (number 131, September 1990).  Oleta decided to record the song after hearing it being played in a record store in Stockholm.  With lyrics about crossing the desert like an Arab man, Oleta's version of the song became a timely release for troops in the Gulf War.
Internationally, "Get Here" reached number 4 in the UK in February 1991, and number 5 in the US in March 1991 - where it was Oleta's only single to dent the Billboard Hot 100.  The single also peaked at number 28 in the Netherlands in January 1991, number 4 in Ireland, number 80 in Germany in March 1991, and number 43 in New Zealand in June 1991.
Locally, "Get Here" performed strongest on the Western Australian state chart, where it reached number 136.
I am surprised by "Get Here"'s lack of success in Australia.  It seemed to gain decent airplay and I caught the video on TV a number of times.  I think there may have even been an ad for the single I heard on radio.
While "Get Here" would be Oleta's biggest solo international hit by far, in Australia, she had another single that peaked higher, which we shall see in November 1991.
Next week (4 March): Four top 150 debuts.
< Previous week: 18 February 1991                                     Next week: 4 March 1991 >
Posted by Bubbling Down Under at 00:00