One unusual thing about this week's new entries is that each one peaked where it debuted on the chart, unable to climb any higher.  Another thing they all have in common is that the lead vocals are sung by men.  With those earth-shattering insights out of the way, let's delve into this week's debuts... 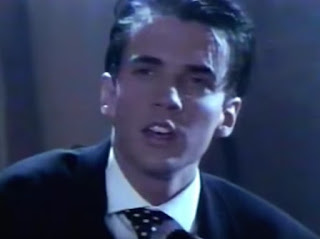 Tommy Page: This 'Page' boy scored his first of three non-hits on the chart this week in 1989.


Number 134 "Got It Made" by Crosby, Stills, Nash & Young
Peak: number 134
Peak date: 8 May 1989
Weeks in top 150: 4 weeks
One thing that really stands out about the charts in 1989 - to me, anyway - is that, among all of the 'teeny-bopper' stuff, you still had the odd track like this that appealed to your mum... or your dad, in this instance.  Not that my dad listened to this group specifically; Gipsy Kings, Traveling Wilburys, Texas and Simply Red were more his thing in 1989.   Are there such wider-appeal acts in the singles charts these days?  I'm guessing not, as none of it appeals to me, at the ripe old age of 41.  Back onto the artists in question, Crosby, Stills, Nash & Young rode a wave of relative success for them on the Australian chart, off the back of number 53 'hit' "American Dream" from earlier in 1989, with this follow-up release. While not as instantly catchy, I prefer this song to its predecessor.


Number 145 "Don't Know What You Got (Till It's Gone)" by Cinderella
Peak: number 145
Peak date: 8 May 1989
Weeks in top 150: 1 week
Weeks on chart: 3 weeks
Here's another song I didn't know at the time, but have become more-recently acquainted with, thanks to the excellent Monday night (technically Tuesday morning, usually) 'vault' episodes of the music video program rage.  It seemed obligatory for every metal act in the mid-late 80s to have a lighters-in-the-air big ballad release, and this was Cinderella's.  It was also the group's first foray onto the Australian singles chart.  We will hear from them again in July.  The band finally cracked the top 100 singles chart in 1991 with "Shelter Me", though couldn't climb higher than number 48.


Number 146 "Nightmares" by Violent Femmes
Peak: number 146
Peak date: 8 May 1989
Weeks in top 150: 2 weeks
In 1986, Violent Femmes scored a number 54 hit locally with their version of  "Children of the Revolution", but had not, until now, made a return visit to our singles chart.  The group would score two top 100 singles during the 90s, but none would climb higher than number 62.  It seems that Violent Femmes fans were more inclined to buy their albums, which had greater success.  Violent Femmes will bubble down under again in 1991.

Number 149 "A Shoulder to Cry On" by Tommy Page
Peak: number 149
Peak date: 8 May 1989
Weeks in top 150: 1 week
I first became acquainted with Tommy Page via another single that would bubble down under in 1990.  Poor Tommy couldn't dent the ARIA top 100, but bubbled under three times between 1989 and 1991!  Maybe he would have had more success if the record company had ditched the slick, American-sounding overproduced ballads and instead released the Harding & Curnow (the Stock Aitken Waterman 'B-team') remixed version of "A Zillion Kisses" as a single.  Sadly, Tommy took his own life in 2017, aged 49.

Weeks on chart: 1 week
Hailing from New York City, White Lion formed in 1983.  "When the Children Cry", their first single to chart in Australia, was lifted from the band's second album Pride (number 149, March 1989).
"When the Children Cry" reached number 3 in the US, number 2 in Canada in February 1989, number 88 in the UK in March 1989, and number 7 in Sweden in May 1989.
Locally, "When the Children Cry" performed strongest in South Australia/Northern Territory, where it reached number 133.
Although the band never landed a top 100 single or album in Australia, we will see them bubble under on a few more occasions, with their next visit to this region of the chart coming in July 1989.

Next week (15 May): Seven new entries, plus two bubbling WAY down under debuts.  Among them is the original version of a song that would become a hit when covered by another artist in 1990, and a rather bizarre cover of an AC/DC song.

Posted by Bubbling Down Under at 00:00