The most obvious common thread among this week's seven new entries and two bubbling WAY down under entries is that I didn't know any of these songs at the time; although one of them would become a proper hit when covered by another artist a year and a half later. 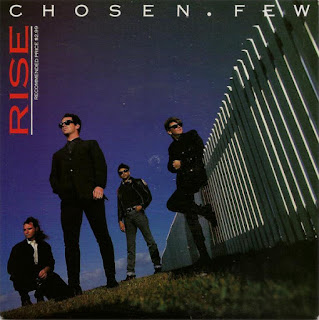 Chosen Few: Only a chosen few can rise to the top 100.


Before unearthing the 101-150 segment of the charts, I had no idea that the Daryl Braithwaite version of this song, which became a top 30 hit a mere 18 months later, was a cover version.  Chosen Few were an Australian band, formed in 1985.  They only released one album, Friends, Foes & Firewood, which I can exclusively reveal peaked at number 128 on the albums chart in July 1990.  This track is lifted from that album.  Chosen Few will bubble under again on the singles chart in 1990 and 1991; unfortunately, they never cracked the top 100.

Another track by an Australian artist I was unaware of at the time, Robyn Dunn has a Wikipedia page, despite not ever cracking the top 100.  Her notability for warranting her own article (yes, I moonlight as a Wikipedia editor) was presumably established due to being nominated for an ARIA Award for Best Female Artist in 1990, for parent album Labour of Liberty.  Only a snippet of the music video, screened on a 2019 rage Retro Month repeat of a 1989 episode of The Factory, is used in the video below.

Bee Gees (no 'The') made their first of three Bubbling Down Under appearances in 1989 with this track; another one I was unfamiliar with in 1989.  As mentioned in my special post on singles peaking at number 101 between 1989 and 1991, Bee Gees were absent from the Australian top 100 singles chart for almost a decade, between January 1988 and June 1997.  The trio fared marginally better in the UK, where this track peaked at number 54.

Without having access to the relevant chart book/s to verify the chart positions are accurate for myself, Del's Wikipedia article lists that he had numerous charting singles in Australia during the 1960s, including three number ones.  Since the 60s, however, (I can verify that) he only scored one top 100 'hit' in Australia, with "Tell Her No" in 1975 (peaking at number 90).  While this track just scraped into the Australian Music Report top 100 at number 99, it peaked 25 places lower on the ARIA chart.  Tragically, Del died due to suicide less than a year later in February 1990, aged 55.

Number 145 "Me and Mrs Jones" by Ten Wedge
Peak: number 127
Peak date: 5 June 1989
Weeks in top 150: 7 weeks
I was expecting this group to hail from the US, given the smooth r&b sound; but it appears that they were Australian.  A cover version of the Billy Paul song about an extramarital affair, Ten Wedge's version didn't quite take off.  We'll hear from them again in 1990.

An American band, Dreams So Real dented the lower end of the Australian Music Report top 100 singles chart with this (at number 97), but peaked 51 places lower on the ARIA chart.  Wikipedia tells me that this track peaked at number 28 on the US Billboard Mainstream Rock Tracks (now Alternative Songs) chart - but because the Billboard website is so... how shall we say, crap, I can't actually verify whether this information is correct.  The group released three studio albums between 1986 and 1990 before being dropped by their record label.

Number 150 "Highway to Hell" by Tiny Tim
Peak: number 150
Peak date: 15 May 1989
Weeks in top 150: 1 week
Now this, readers, is truly bizarre.  Tiny Tim, real name Herbert Butros Khaury, was a ukelele player (yes, you read that right), best known for his falsetto version of "Tiptoe Through the Tulips".  So... just the kind of person you'd expect to release a cover version of an AC/DC song, right?  Sang in a much lower register, you would never guess this was the same person who sang "Tiptoe Through the Tulips".

Will to Power are best known in Australia for their cover version medley of "Baby, I Love Your Way/Freebird Medley", which peaked at number 20 locally, and topped the US Billboard Hot 100 chart.  That song, however, was not typical of the duo's sound; they instead were more of a dance (in that late 80s US kinda-way 'dance') act.  "Fading Away" didn't perform nearly as well on the chart as its predecessor, peaking at number 65 in the US, and outside the top 150 locally.  It would take another cover version ballad for the group to score a second, and final, hit in early 1991.

Next week (22 May): only four top 150 new entries, including a flop from an act responsible for one of the bigger hits of 1989.  You can follow my posts on facebook.

Posted by Bubbling Down Under at 02:57