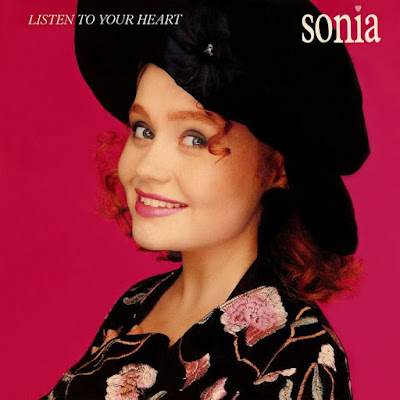 Sonia: don't listen to the charts!
Top 150 debuts:
Number 134 "Love" by Chosen Few
Peak: number 122
Peak date: 9 April 1990
Weeks in top 150: 8 weeks
We saw Australian band Chosen Few back in May 1989, with the original version of "Rise" - a track that would become a number 23 hit for Daryl Braithwaite in December 1990.
I hadn't heard this one before, and can't tell you much about it... except that the single spent 8 weeks climbing to its peak of number 122 - and then fell out of the top 150 the following week.  Both this single and "Rise" are lifted from the album Friends, Foes & Firewood (number 128, July 1990).
Chosen Few will join us again in 1991.  In the interim, they released a single in June 1990, "Days Like These", which missed the top 150.
Number 138 "Listen to Your Heart" by Sonia
Peak: number 119
Peak date: 5 March 1990
Weeks in top 150: 8 weeks
Weeks on chart: 9 weeks
Sonia Evans, known as just 'Sonia', scored a number 1 in the UK in July 1989 with her debut single, "You'll Never Stop Me Loving You", an ode to stalking (check out this fan-made video using footage from the 1993 film The Crush!) written and produced by hit-makers extraordinaire Stock Aitken Waterman.  While this success was not replicated in Australia, it did nonetheless give Sonia a respectable number 29 hit in October 1989.
Although a fan-favourite, Sonia's second single, "Can't Forget You" did not fare nearly as well, peaking at number 17 in the UK in October 1989, and number 98 in Australia in December 1989.
Sonia's third release, "Listen to Your Heart", came out in the UK towards the end of November 1989, and slowly (for their chart at the time) made its way to number 10 in January 1990, in the quieter sales post-Christmas period.
Being a Sonia fan, I bought "Listen to Your Heart" on cassingle... before I'd actually heard it!  In fact, I bought all five of Sonia's singles lifted from her debut album Everybody Knows (number 144, September 1990) on cassette.  I have wondered before if I was the only person in Australia to do so.
Despite her promising chart debut in the UK, Sonia couldn't maintain the same level of success (though no-one did) as fellow Stock Aitken Waterman-produced artiste Kylie Minogue.  However, Sonia became the first British female artist to score five top 20 singles from one album.  That didn't stop her record label, Chrysalis, from dropping her, despite Everybody Knows peaking at number 7 and selling more than 100,000 copies in the UK.
Sonia also parted ways with Stock Aitken Waterman, who were themselves by this point on the way out, towards the end of 1990.  There is speculation that the reason for Sonia's departure from the team was because she asked Pete Waterman for a large advance for a second album, so that she could buy her parents a house.  Her request could not be obliged.  However, Sonia successfully sued for royalties she was owed from the album.
While Sonia continued notching up UK top 20 hits until 1993, including a stint at Eurovision, she was largely relegated to becoming a covers act after parting ways with Stock Aitken Waterman.  As a Stock Aitken Waterman fan, it's a shame that there wasn't a second album produced by them, as Sonia was one of the more-capable singers they worked with.  Everybody Knows is considered by many fans to be one of the production trio's best.  Ah, what might have been...
Sonia's previous two singles, "You'll Never Stop Me Loving You" and "Can't Forget You", had performed strongest on the Victoria/Tasmania state charts, where they peaked at numbers 15 and 74 respectively.   "Listen to Your Heart" performed strongest on the South Australia/Northern Territory state chart, where it peaked at number 72.  "Listen to Your Heart" also cracked the Australian Music Report top 100 singles chart, where it peaked at number 96.
While Sonia never set the Aussie charts alight, "Listen to Your Heart" is the first of four visits Sonia will make to this region of the chart in 1990!  We will next see her in May.
Number 149 "The Eve of the War" by Ben Liebrand
Peak: number 118
Peak date: 19 March 1990
Weeks in top 150: 8 weeks
Dutch DJ and remixer Ben Liebrand was responsible for updating several older hits with a contemporary 80's sound for their remixed re-releases, such as Hot Chocolate's "Every 1's a Winner" in 1987.  He was also behind Phil Collins' "In the Air Tonight '88", which became a belated number 47 hit in Australia in June 1989, and the Rough 'n Ready Remix of Ram Jam's "Black Betty" (number 17, May 1990).
"The Eve of the War" was originally released by Jeff Wayne in 1978, lifted from his concept 'rock opera' album Jeff Wayne's Musical Version of The War of the Worlds (number 1, October 1978).  Given that this version of the track is, I assume, a remix and not a completely new recording, I am not sure why Jeff Wayne is not credited on this release.
That being said, "The Eve of the War" appears again in the number 101-150 region of the ARIA chart in September 1991, credited this time to Jeff Wayne (and not Ben Liebrand) - and betters its 1990 peak.  But I'll treat that as a separate release, given the different artist credit, when we get to it next year...
This version of "The Eve of the War" peaked at number 9 in the Netherlands in June 1989, and number 3 in the UK in December 1989.
We will see Ben again twice this year - once in his own right, and credited as a remixer on another release.
Next week (26 February): The relative paucity of new entries continues next week, with just two new top 150 debuts - one of which I've already featured in a special post.  In addition, there is one bubbling WAY down under entry.  You can also follow my posts on instagram, facebook and twitter.
< Previous week: 12 February 1990                                    Next week: 26 February 1990 >
Posted by Bubbling Down Under at 00:00