This week, I have five new debuts to talk about, so let's jump straight in: 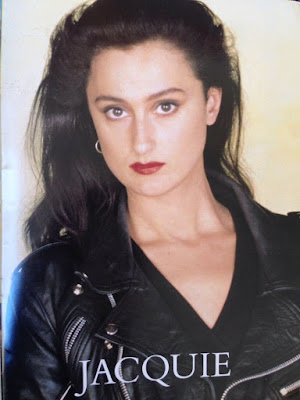 Bananarama's Jacquie O'Sullivan: since she was effectively left off her own record this week, I thought it only fair for her to represent this week's post.

Debuts:
Number 123 "Raindrops" by Kool & The Gang
Peak: number 123
Peak date: 7 August 1989
Weeks in top 150: 7 weeks
Despite releasing material since the late 1960s, American group Kool & The Gang waited until 1981 for their first taste of chart success in Australia.  Between 1981 and 1987, the group placed 7 singles in the Australian top 100 singles chart, with the biggest of these being "Cherish", reaching number 8 in November 1985.  Surprisingly, their version (the original) of "Celebration" only peaked at number 33 in Australia in August 1981.  Fast forward to 1989, and "Raindrops" had minor chart success in Germany (number 42) and nowhere else.  Sweat, the album it was listed from, also failed to achieve significant chart success, peaking at number 28 in Germany, and number 103 on the Australian albums chart.  The group even visited Australia for a promotional visit around this time, performing "Celebration" on the then-new program, Countdown Revolution (with live vocals to boot!), rather than this single.


Number 140 "Crazy About Her" by Rod Stewart
Peak: number 130
Peak date: 21 August 1989
Weeks in top 150: 7 weeks
We saw Rod bubble WAY down under back in February with the third single from his 1988 Out of Touch album, and here was the fourth.  While "Crazy About Her" failed to chart in the UK, it peaked at number 11 in the US, and hit the top 10 in the Netherlands and the Flanders region of Belgium (Belgium has separate charts for the Dutch and French-speaking regions).  We will see Rod next in 1992.


Number 148 "I'm That Type of Guy" by L.L. Cool J
Peak: number 148
Peak date: 7 August 1989
Weeks in top 150: 1 week
The lead single from his third album Walking with a Panther (number 85, September 1989), "I'm That Type of Guy" was L.L. Cool J's first release to make the Australian charts.  Up until this point, rap had enjoyed little commercial success on the Australian singles chart, with most of the exceptions being either novelty (Morris Minor and The Majors) or novelty-like (Tone Lōc) tracks.  While that would change in 1990, L.L. Cool J would have to wait until 1996 for his first major hit on the Australian chart.  Across the ditch, New Zealand appreciated this track more, with it reaching number 11 there.  In the US, "I'm That Type of Guy" peaked at number 15 in May 1989.

Bananarama were on a roll on the Australian charts in 1988, with back-to-back top 5 singles, and even a number 1 album.  But since then, none of their singles had peaked higher than number 25.  Touring Australia (or anywhere, really) for the first time in April 1989 didn't seem to revive the group's popularity, with their tour-coinciding single "Nathan Jones" peaking at only number 59 in March.  Fast forward a few months to August, and this new version of their number 32 hit from February 1985 landed outside the top 100 - their first Australian single to miss the top 100 since "Do Not Disturb" in 1985.

The original version of "Cruel Summer" was released locally in November 1983, but failed to chart, despite being a number 8 hit in August 1983 in their native UK.  The song went on to peak at number 9 in the US in September 1984, after being used in The Karate Kid; this no doubt prompted the Australian record company to give it another shot.  "Cruel Summer '89" was meant to be the lead single from a greatest hits-type remix album, but plans for that were scrapped after this single barely scraped into the top 20 in the UK (number 19, June 1989).

1. It's technically the first 'duo' Bananarama single!  Rather than re-record the vocals with then new-ish band member Jacquie O'Sullivan, vocals from a 1983 demo (not the original released recording), where each 'Nana's vocals were captured separately, were used, so they could eliminate ex-group member Siobhan Fahey's vocals from the mix.  Not bothering to add Jacquie's vocals in Siobhan's place was really quite a shady thing to do!  Poor Jacquie - whose face also wasn't included on the art-work for their late 1988 The Greatest Hits Collection album - has revealed in more-recent years that she was effectively treated as a paid employee, rather than an equal member, during her relatively brief (1988-1991) tenure with the group.  Jacquie elaborates on this further in an interesting podcast interview posted in March this year.

2. It contains an extra verse that wasn't on the original!  The "who can I find when I'm trapped here inside these four walls?" lyrics appear on the demo used, but were not included in the final version of the 1983 release.

Bananarama will join us again in 1991 - with Jacquie in tow!

Number 180 "Never" by The House of Love"
Peak: number 165
Peak date: 28 August 1989
Weeks on chart: 2 weeks
Hailing from England, "Never" was the first single released from The House of Love's second of two albums titled The House of Love (number 134, May 1990).  Yes, you read that correctly: the band released two albums with the same name!
"Never" was also the first of two consecutive singles for the band to peak at number 41 in the UK, where it reached this peak in April 1989.
We will see The House of Love again in 1990.
Next week (14 August): Six new top 150 debuts, and another two bubbling WAY down under entries.  Among them is a song credited as being the first instance of a pop song with a featured rapper and one of the first (pre-Madonna) music videos to incorporate vogueing!  You can also follow my posts on facebook.