Like last week, one thing the majority (4 out of 7) of this week's new entries have in common is that they registered on the Australian Music Report top 100 singles chart.  Let's take a look at them. 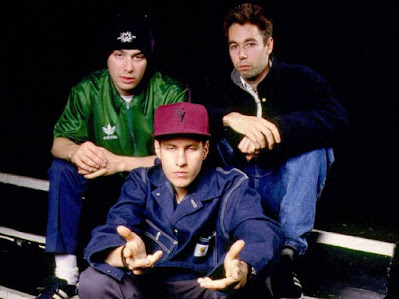 Beastie Boys: You gotta fight for your right to have a hit Down Under!

Henry Lee Summer scored a number 39 hit in Australia in September 1988 with "I Wish I Had a Girl".   This track was the lead single from his I've Got Everything album, and became his second and last US top 20 hit, peaking at number 18 in August 1989.  "Hey Baby" peaked much higher on the Australian Music Report singles chart, where it reached number 76.

Living in a Box's self-titled single from 1987 had, to date, been their only entry on the Australian singles chart (number 49, August 1987).  "Gatecrashing" was actually the second single lifted from the album of the same name in the group's native UK, but was the first single off it released in Australia.  "Gatecrashing" performed strongest on the South Australia/Northern Territory state chart, where it peaked at number 55; it also peaked higher on the Australian Music Report singles chart, at number 95.  Living in a Box will join us again in November.


Bubbling WAY down under:
Number 156 "Harry Houdini" by Kon Kan
Peak: number 156
Peak date: 21 August 1989
Weeks on chart: 1 week
Canadian synth-pop band Kon Kan landed a minor 'hit' on the Australian chart with "I Beg Your Pardon" (number 100, July 1989), their debut single, earlier in the year.  "Harry Houdini" was the second single lifted from the band's debut album Move to Move (released in Australia in July 1989, did not chart).
Internationally, "Harry Houdini" peaked at number 39 in Canada, number 88 in the UK in July 1989, and number 14 in New Zealand in September 1989.
On the ARIA state charts, "Harry Houdini" performed strongest in South Australia/Northern Territory, where it reached number 140.
We will next see Kon Kan in November 1989.
Number 160 "My One Temptation" by Mica Paris
Peak: number 153
Peak date: 4 September 1989
Weeks on chart: 3 weeks

In Mica's (pronounced "mee-sha") native UK, "My One Temptation" was her first single release, way back in April 1988, where it peaked at number 7 in June of that year.  In Australia, "My One Temptation" was first released in late June 1988, but failed to chart.  Her debut solo album, So Good, however, managed to peak at number 127 on the ARIA albums chart in January 1989.  Before the June 1989 re-release of "My One Temptation", Mica had two other non-charting singles released locally: "Like Dreamers Do" (featuring Courtney Pine), and "Where Is the Love" featuring Will Downing.  Other than scraping number 100 with this single on the Australian Music Report chart, Mica would never score a top 100 hit in Australia on the ARIA chart, though she would come close in 1995.  "My One Temptation" performed the strongest on the South Australia/Northern Territory state chart, where it peaked at number 105.  We will next see Mica in 1991.


Number 165 "Licence to Kill" by Gladys Knight
Peak: number 154
Peak date: 28 August 1989
Weeks on chart: 2 weeks
As someone with next to zero interest in movies, even I knew that Licence to Kill was the name of a Bond flick... and this just happens to be the theme song from that particular one.
Gladys Knight & The Pips, her band, placed six singles on the Australian top 100 chart between 1971 and 1976.  The biggest of those, "So Sad the Song" (number 13, February 1977), was the last time Gladys had visited our charts.
"Licence to Kill" gave Gladys a top 5 hit across Europe, and a number 6 hit in the UK, but she barely registered a blip on the ARIA chart.
Gladys will score another bubbling WAY down under 'hit' in 1996.
Next week (28 August): Four new top 150 debuts, and another bubbling WAY down under entry.  Among them, we have the understated return of a band who made a big splash at the start of the decade, and would again soon.  You can also follow my posts on facebook.

Posted by Bubbling Down Under at 00:17