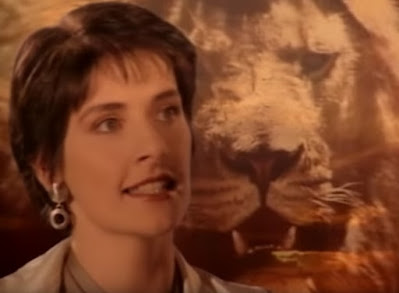 Enya: Before Tiger King was a thing, Enya was the Lion Queen.

Enya's breakthrough hit, "Orinoco Flow", was so unlike anything else on the chart, which no doubt helped it to get noticed and climb to number 6 in Australia.  The follow-up release, "Evening Falls..." is a rather haunting tune, but a hit single it doth not sound like.  Despite that, this single managed to reach number 3 in Enya's native Ireland, and number 20 in the UK.  I doubt the record company were too bothered that it didn't do quite as well as "Orinoco Flow", given that parent album Watermark went on to spend several years on the chart, and earned a 6x platinum certification in Australia.  The third release from Watermark, "Storms in Africa (Part II)", seems like a much better-known song than "Evening Falls...", thanks to its use in both the movie Green Card and in Ansett TV commercials; but, somehow, it did not even chart in Australia!  Enya will pay the 101-150 region of the chart another visit when 1992 rolls around.

Although Gary had been releasing music since 1978 and had a few (outside the top 40) charting albums Down Under, he had so far only managed to score one moderate hit single here, with a cover of the Easybeats' "Friday on My Mind" in 1987.  While his signature tune would come a year later, in the meantime, the best Gary could do was number 113 with this, the second release from his After the War album.  Gary will join us again in 1991 and 1992 with additional peaking-outside-the-top-100 singles.

Hailing from Canada, Andrew Cash these days is primarily known as being a Canadian politician, who was a Member of Parliament there between 2011 and 2015.  There is scant information about his recording career on his wikipedia page, though it does mention he recorded three albums, one of which was a top 100-charting success in his homeland.

Eight months before (barely) gracing our charts, this one peaked at number 54 in the UK in August 1988.  Who was behind Electra?  Why, none other than Paul Oakenfold, who went on to become a successful record producer and remixer, remixing songs for the likes of Madonna, U2, Britney Spears and... The Rolling Stones, and forming Perfecto Records with partner Steve Osborne.


Number 154 "Ana Ng" by They Might Be Giants
Peak: number 154
Peak date: 10 April 1989
Weeks on chart: 2 weeks
I'm not sure where, but I once read a comment that They Might Be Giants make kindergarten music for adults, and I think that's an apt description.
Hailing from Brooklyn in the US, "Ana Ng" was the first single lifted from the band's second album Lincoln (number 116, May 1989).  It was They Might Be Giants' first release to chart nationally in Australia.  I say 'nationally', because a single from their 1986 debut They Might Be Giants album (number 159, December 1990), "Don't Let's Start", registered on four of the five state charts in the second half of 1988, but missed the national chart (when it ended at number 100).  Such is life.
Interestingly, "Ang Ng" did not chart anywhere else, other than the US Billboard Modern Rock Tracks chart (not a 'real' chart, in my opinion), where it peaked at number 11 in December 1988.  The single was not released commercially in the US, which at that time rendered it ineligible to make the Billboard Hot 100.
You may be wondering... who is the 'Ana Ng' in question?  Well, the song came to be when John Linnell, who sings lead on this track, was looking at a Manhattan phonebook for inspiration when writing songs, and noticed the large number of Ng listings - a common Cantonese surname.  Linnell also drew inspiration from a Pogo comic strip, depicting characters who were digging a hole to China.
They Might Be Giants would not score a breakthrough hit single in Australia until "Boss of Me" (number 29, September 2001) was used as the theme for the TV series Malcolm in the Middle.  Despite their lack of hits down under, the band placed six singles outside the national ARIA top 100 between now and 1997.  We will next see They Might Be Giants in 1990.
Number 169 "Superwoman" by Karyn White
Peak: number 162
Peak date: 17 April 1989
Weeks on chart: 2 weeks
Unmistakably a L.A. Reid/Babyface production, "Superwoman" was the second single lifted from American Karyn White's debut album Karyn White (number 130, May 1989).  It followed the more-upbeat "The Way You Love Me", which was not released in Australia until January 1990 as Karyn's third single, with "Secret Rendezvous" being released in-between in June 1989.  In contrast to "Superwoman", both of these singles failed to chart locally.  Karyn's biggest chart success in Australia came in 1991, when "Romantic" peaked at number 68 on the ARIA singles chart in October of that year.
I've never been a fan of this style of... schmaltz that L.A. Reid/Babyface seemed to specialise in, and which usually sold by the truckload in the US during the late 1980s and throughout the 1990s.  Indeed, "Superwoman" peaked at number 8 on the US Billboard Hot 100 in April 1989.
We will see Karyn again in 1992.

Next week (17 April): another 4 debuts, including an all-girl Kiwi chart-topper from 1988, plus another bubbling WAY down under entry.  You can also follow my posts on facebook.

Posted by Bubbling Down Under at 02:10