A mixed bag of new entries this week, with a common thread - of your single performing better overseas than in your home country - shared by three of them.  The other new entry contains an artist who would eventually go on to greater success in Australia than in her homeland. 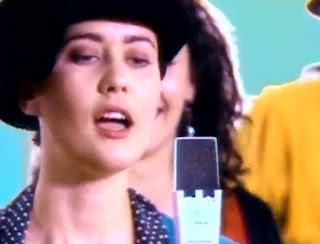 When the Cat's Away: Before escaping, Margaret Urlich was part of this Kiwi female covers band.


When the Cat's Away were a female vocal 'supergroup' of sorts, although Margaret Urlich - who went on to have a successful solo career - is the only star I can identify.  The group formed in 1985 to perform cover versions of songs they liked, all just for a bit of fun.  This song, however, went all the way to number one on the New Zealand singles chart in December 1988.  I first became aware of it when seeing it at number one on the New Zealand top 10 singles chart published in the Australian edition of Smash Hits magazine.  A cover version of the 1969 Blue Mink song calling for racial harmony, this track peaked 102 places lower on the ARIA singles chart.  I caught the video once or twice in early 1989 on rage, aired before the top 50 chart rundown commenced.

Number 127 "Something So Strong" by Jim Capaldi
Peak: number 126
Peak dates: 24 April 1989 and 1 May 1989
Weeks in top 150: 5 weeks
Until now, Jim's only real singles chart success in Australia had been his number 6-peaking "Love Hurts" - one of two versions of the same song that became big hits here in 1976.  Making the chart 'success' of this track even more strange is that it didn't chart in his native UK, the US, or anywhere else for that matter.  It does sound like the kind of thing Australian FM radio might have lapped up in the late 80s, though.  Jim passed away in 2005.


Number 166 "One Love" by Pat Benatar
Peak: number 166
Peak date: 17 April 1989
Weeks on chart: 1 week
Pat scored a big hit in 1988 with her version of "All Fired Up".  Few probably would have predicted at the time that it would be her last major hit.  This third single from Pat's 1988 Wide Awake in Dreamland album barely registered a blip, peaking at number 59 in the UK and doing nothing everywhere else.  Pat will join us again in 1991.

Next week (24 April): another four new entries - two artists who scored big hits during the 80s among them, plus the understated chart arrival of an artist who would go on to score a number one in Australia. Three bubbling WAY down under singles also debut.  You can also follow my posts on facebook.

Posted by Bubbling Down Under at 00:20