Four of this week in 1991's debuting singles that peaked in the 101-150 region of the chart spent at least seven weeks in the top 150, which is above the 1991 average of 5.65 weeks.
I have updated another earlier post with the following: 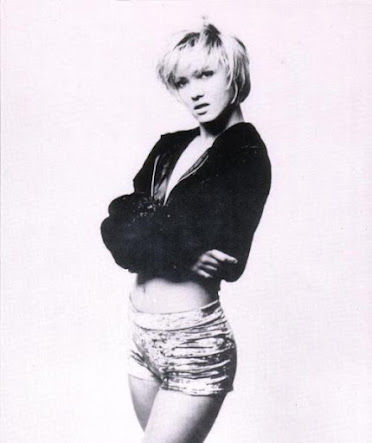 Collette: this wouldn't be everlasting chart success.
Top 150 debuts:
Number 133 "This Will Be (Everlasting Love)" by Collette
Peak: number 122
Peak date: 29 April 1991
Weeks in top 150: 9 weeks
Weeks on chart: 9 weeks
New-Zealand born Collette Roberts started her career as a fashion model, appearing on the cover of Dolly magazine in 1983.  She launched a recording career in 1989 with an acid-house inspired cover version of Anita Ward's "Ring My Bell", which reached number 5 in May 1989 and was certified gold.  Collette's iconic bike shorts and fluorescent lycra image in the video for "Ring My Bell" became closely associated with her, and bike shorts are one of the first things most people who grew up in the 80s would think of when the name 'Collette' is mentioned.
After the initial success of "Ring My Bell", Collette copped a lot of flak and was almost universally panned by critics for her her image, lack of technical vocal ability, and because she was a model who scored a big hit with a cover version.  Australian radio was also stuck in classic/pub rock hell at this point in time, and would not touch dance or female pop music with a barge pole.
Often inaccurately referred to as a one-hit wonder, Collette followed up "Ring My Bell" with two further top 40 hits, which she co-wrote, "All I Wanna Do Is Dance" (number 12, July 1989) and "That's What I Like About You" (number 31, November 1989).  Collette's debut album Raze the Roof (number 48, November 1989) was a moderate success, denting the top 50.
After a gap of nine months, Collette returned in 1990 with a radically different image.  Gone were the bike shorts and bright colours; in was a short hair cut and lots of dark clothes.  Collette co-wrote her next single, "Who Do You Think You Are" (number 56, August 1990) as a response to her many critics.  Unfortunately, it was not a major success.  A cover version of Diana Ross' "Upside Down" (number 91, January 1991) was released as its follow-up, but fared even worse on the charts.
Collette's second album Attitude (number 107, April 1991) was preceded by another single, "This Will Be (Everlasting Love)".  Despite sharing a similar title, the song is not a cover version of Natalie Cole's "This Will Be (An Everlasting Love)" (number 28, February 1976), but is an original, written by Collette and Southern Sons' Peter Bowman.
"This Will Be (Everlasting Love)" performed strongest in South Australia/Northern Territory, where it reached number 94.  The single would become Collette's final solo release.  She then briefly ventured into acting, appearing in two episodes of Home and Away in 1991 as Constable Nick Parrish's date, and then became a make-up artist.  In 2006, Collette appeared on an episode of Where Are They Now?, revealing that she also volunteers at Sydney's Taronga Zoo.
Despite Collette's solo recording career ending in 1991, we will see her again as a featured artist in 1995.
Number 134 "Spit in the Rain" by Del Amitri
Peak: number 118
Peak date: 15 April 1991
Weeks in top 150: 7 weeks
Weeks on chart: 10 weeks
Scottish band Del Amitri formed in Glasgow in the early 1980s.  Despite claims that the band name is Greek for "from the womb", the name Del Amitri is essentially meaningless.
Del Amitri released their first, self-titled, album in 1985, but it was not a commercial success.  After a four-year gap, their second album Waking Hours (number 8, June 1990), was released in Europe in 1989.  The album's lead single, "Kiss This Thing Goodbye" (number 28, June 1990), became a sleeper hit, taking seven-and-a-half months to reach its peak in Australia and spending 41 weeks on the chart.  Surprisingly, "Kiss This Thing Goodbye" was a bigger hit in Australia than in the band's home country, where it only reached number 43 in March 1990 after initially peaking at number 59 in August 1989.
"Kiss This Thing Goodbye" was followed-up, in Australia, by "Nothing Ever Happens" (number 46, June 1990) - my favourite Del Amitri song, and "Stone Cold Sober" (number 50, September 1990).  A fourth single from Waking Hours, "Move Away Jimmy Blue", was released locally in November 1990, but did not chart.
"Spit in the Rain" was an in-between albums single that did not appear on any of Del Amitri's studio albums until an expanded 2-CD re-issue of Waking Hours was released in 2014.
Internationally, "Spit in the Rain" peaked at number 21 in the UK in November 1990.
Within Australia, "Spit in the Rain" performed strongest on the South Australia/Northern Territory state chart, where it reached number 78.
We shall next see Del Amitri in 1995.
Number 139 "More Than a Girlfriend" by No Justice
Peak: number 121
Peak date: 20 May 1991
Weeks in top 150: 9 weeks
Australian band No Justice only released two singles, 1990's "Lately" (number 91, August 1990), and this one, which does not appear to be available to listen to anywhere online at the time of writing this.  It doesn't help that "More Than a Girlfriend" was only issued on vinyl and cassette, so sourcing a digital rip would not be easy.
Despite the band's lack of chart success, "Lately" managed to land heavy rotation on Home and Away at the time, and the band even appeared 'live' performing the song in an episode.
The drummer in No Justice was Countdown Revolution host Chook (real name Andrew Chalhoub), who sadly passed away in 2018 - something I was not aware of until researching this song for my post this week.  Before discovering this fact, I made the mistake of sending Chook a message on facebook (it was not apparent that he had died from his public profile) to ask if he had a copy of either the music video or an audio clip of this song...   Instead, all I can post here is an image of the single sleeve.
I probably heard this song at the time, but cannot recall how it goes. 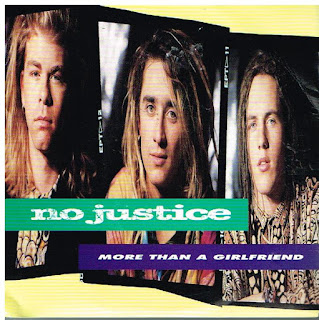