A common thread among this week's three new entries - not counting the two bubbling WAY down under debuts - is that they're all twinged with country music.  Or so I think.  Who knew that a mini country music 'trend' was happening in Australia in 1989?  I sure didn't. 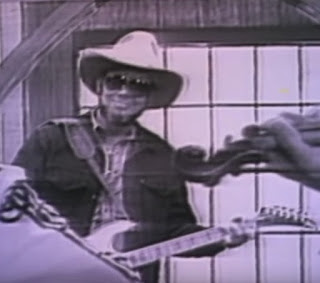 Before Billy Ray Cyrus and Shania Twain conquered the charts, there was... Hank Williams, Jr.
Debuts:
Number 131 "Angel Eyes" by The Jeff Healey Band
Peak: number 115
Peak date: 23 October 1989
Weeks in top 150: 12 weeks
Fifteen years later, Australian Idol first season also-ran Paulini would take her cover of this song to number one, but in 1989, the original version by Canada's The Jeff Healey Band had to settle for bubbling outside the top 100 with "Angel Eyes".  The single performed better on the Australian Music Report chart, where it peaked at number 79.  Lead singer, Jeff Healey, died in 2007, aged 41.  We will see The Jeff Healey Band again later in the year, and again in 1990.

Number 146 "There's a Tear in My Beer" by Hank Williams, Jr.
Peak: number 118
Peak date: 3 July 1989
Weeks in top 150: 6 weeks
Oh dear.  I don't know what to say about this one (which I'd never heard of before), other than I assume it must have some sort of cult appeal, as it has over 5 million views on YouTube, since 2014.  Wikipedia informs me that this track peaked at number 7 on the US Billboard Hot Country Songs chart.

Almost a year before Sinéad O'Connor's mega-hit "Nothing Compares 2 U", The Jacksons bubbled under with this, similarly-titled ditty.  Again, this one charted better on the Australian Music Report chart, where it peaked at number 89.  The Jacksons last scored a (number 32) hit down under with "Torture", in 1984.  This would turn out to be the last charting single in Australia for the group.  Parent album 2300 Jackson Street peaked at number 99 on the ARIA Albums Chart in July 1989.


Next week (26 June): Five new entries, including the return of two groups we haven't seen on the chart since 1987, and the first charting song (that I am aware of) to sample the I Dream of Jeannie theme.  Plus, there is another bubbling WAY down under entry.  You can also follow my posts on facebook.