Last week, I mentioned that four of that week's six new entries were singles that did not chart in any other country, and this week, it is four of out seven!  Granted, two of those exclusive chart 'hits' are by Australian artists, this time.  It is always interesting, to me, to uncover a chart position for something that didn't chart anywhere else... even if that peak happens to be outside the top 100. 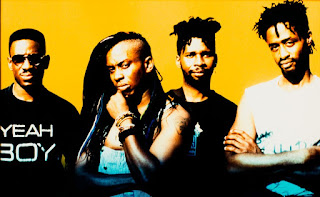 Mishap with hair clippers during lockdown? Just shave half of it off, like Corey Glover from Living Colour.

Johnny was a Bahamian-American singer; I say 'was', because he tragically died in a drowning accident in 2015, aged 55.  "Birthday Suit" reached number 36 on the US Billboard Hot 100 in April 1989, but failed to chart anywhere else, from what I can see.  Johnny scored a number 79 'hit' here in early October 1988 with "Just Got Paid", which was a number 10 hit for him in America.

The Beatmasters, who seemed to feature a different vocalist with every release, scored a number 37 hit in Australia with "Rok Da House" in May 1988, with Cookie Crew on vocals.  Merlin, real name Justin Mark Boreland, was the nephew of UK reggae singer Smiley Culture.  "Who's In the House" peaked at number 8 in the UK in April 1989.  The Beatmasters later went on to score a number 88 hit down under with Betty Boo, and will bubble down under again, with another featured artist, in 1990.

Living Colour had a slow start on the Australian charts, with "Cult of Personality" peaking at number 54 in April 1989.  Issued as the second single from their debut album Vivid in Australia, "Open Letter (To a Landlord)" stalled outside the top 100.  It wouldn't be until 1991 that the group would achieve their breakthrough hit down under.  Before that hit, Living Colour will bubble down under again in 1990.

I can't tell you much about Scary Bill, other than they were an Australian group, and this was their only ARIA top 150 'hit' single.  Their self-titled debut album, from which this track is taken, peaked at number 107 in August 1989.  This single performed much better on the Australian Music Report chart, where it peaked at number 74.

Tiff's time as a chart star was pretty much over by this point.  The third single lifted from the album of the same name, "Hold an Old Friend's Hand" failed to chart anywhere else, other than on the US Adult Contemporary chart (which, as I've mentioned before, doesn't really count in my book).  Tiffany will join us again in 1990 and 1993!

Charlie scored two top 40 hits in Australia in 1986, and a further two top 100 entries; the most-recent of which was "Don't Look Back", peaking at number 82 in February 1989.  Both "Don't Look Back" and "Cry Little Sister" were taken from Charlie's self-titled album, which peaked at number 84 in Australia in March 1989.  "Cry Little Sister" did not chart anywhere else.  Charlie will bubble down under again in 1990.

Next week (19 June): A mere three new top 150 debuts, including the original version of a song that would go on to top the ARIA singles chart in 2004.  Also, two more singles bubbling WAY down under debut.  Remember, you can follow my posts on facebook too.