Using a marketing gimmick to sell your product can help to break a single on the chart.  At other times, it spectacularly backfires.  Among this week's new entries, we have: a track that sounds like it was a contender for a Bond movie, a song based on a sample of a fantasy sitcom theme, and a song that was used in a Coca-Cola ad (overseas, anyway).  None of these gimmicks helped the songs in question to become hits in the land of sweeping plains.  Do the songs stack up on their own merits without the associated gimmicks?  Let's take a look at this week's new entries, and see what you think... 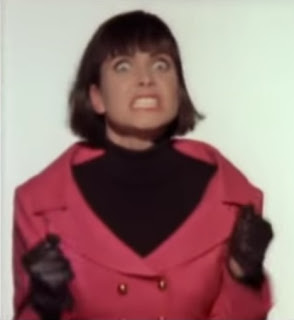 Swing Out Sister: Wig-out, sister! How Corinne Drewery from Swing Out Sister reacted when she saw the peak for her band's new single.
Debuts:
Number 114 "You on my Mind" by Swing Out Sister
Peak: number 114
Peak date: 26 June 1989
Weeks in top 150: 7 weeks
Weeks on chart: 7 weeks
In 1987, Swing Out Sister belatedly burst onto the Australian chart with their breakout hit, "Breakout".  I say 'belatedly', because the single did not reach its peak of number 12 in Australia until late July 1987, despite being released locally in mid-February 1987, and peaking in the UK in November 1986.  Seeming like they might become the next big thing, Swing Out Sister only placed one other single in the top 100 down under - that being follow-up release "Surrender", which peaked at number 78.  Roll on to 1989, and this track, the lead single from the album Kaleidoscope World, sounding and looking a little bit like a Bond theme, stalled outside the top 100.  "You on my Mind" fared better in the UK, where it peaked at number 28; though its chart performance must have still been a disappointment for the group, given that it was the lead single from a new album.  Swing Out Sister will join us again in a couple of months.


Number 131 "O Salvation" by The Celibate Rifles
Peak: number 123
Peak date: 3 July 1989
Weeks in top 150: 4 weeks
We first met The Celibate Rifles back in March, and here they are, bubbling down under again in June, with another track from their Blind Ear album.  The group never scored a top 100 single, but this was the second of five singles that peaked within the 101-150 region of the charts between 1989 and 1992, which must count for something.  The Celibate Rifles will next join us in May 1990.

Number 142 "Girls Ain't Nothing But Trouble" by D.J. Jazzy Jeff & The Fresh Prince
Peak: number 142
Peak date: 26 June 1989
Weeks in top 150: 1 week
When it comes to rap crossing over to the charts, Australia was very behind the times.  This track peaked at number 21 in the UK in October 1986, and must have had a late or re-issued release in the US, where it peaked at number 57 on the Hot 100 in December 1988.  Skip ahead to July 1989, and Australia was finally ready for this track.  Well, kind of.  Following up "Parents Just Don't Understand", their number 48 minor 'hit' from November 1988, "Girls Ain't Nothing But Trouble" barely registered on the chart, spending one week inside the top 150.  I remember seeing this one on Countdown Revolution, and thinking what a novel idea it was to sample the theme from I Dream of Jeannie (I was 10, OK?).  Dimples D, of course, would have much greater success on our chart when trying the same thing in 1991.  DJ Jazzy Jeff & The Fresh Prince will pay the 101-150 region of the chart another visit in 1992.


Number 148 "First Time" by Robin Beck
Peak: number 148
Peak date: 26 June 1989
Weeks in top 150: 2 weeks
Weeks on chart: 4 weeks
Another song we got late in Australia was this one, which spent three weeks at number one in the UK in November 1988.  Despite being released locally in February 1989 and debuting at number 157 on the 27th of that month, it took four months for this to nudge the lower end of the top 150.  An American artist, Robin Beck's UK chart success was largely due to the song being featured in a TV commercial for Coca-Cola.  "First Time" also topped the charts in Germany, the Netherlands, Austria, Switzerland, the Flanders region of Belgium, and Norway.  Had the song had the same level of exposure in Australia, no doubt it would have charted better.
Number 150 "Praying to a New God" by Wang Chung
Peak: number 127
Peak date: 24 July 1989
Weeks in top 150: 10 weeks
Weeks on chart: 11 weeks
Between 1984 and 1987, Wang Chung notched up four top 100 singles in Australia, with the biggest two of those, "Dance Hall Days" and "Everybody Have Fun Tonight", reaching numbers 7 and 8, respectively.  Failing to chart in their native UK, where they had never placed a single higher than number 21, "Praying to a New God" peaked at number 63 on the US Billboard Hot 100.  Owing to the band's greater success in the US, it looks like they tried to change their sound and image to a rockier one for this release, which backfired (as it often seems to).  Despite only peaking at number 127 in Australia, "Praying to a New God" spent 10 weeks in the top 150 region of the chart.  This won't actually be the last we see of Wang Chung - they will bubble WAY down under in 1997!

Next week (3 July): Six new entries, including a single that spent more weeks on the chart than any other peaking within the 101-150 region in 1989.  We also see the arrival of a new diva, and the return of an artist who only ever bubbled under following their top 30 hit from earlier in the year.  Also, there is another bubbling WAY down under entry.  Remember, you can also follow my posts on facebook.