Think you can name Warrant's, Natalie Merchant's and Adeva's first chart 'hits' in Australia?  Depending on your definition of what counts as a charting hit, you could be wrong, as we'll see this week, with these acts bubbling under with earlier releases before they went on to bigger things on the Australian chart.  Also among this week's debuts we have a band releasing their first new material after re-uniting earlier in the decade, and a remix of a number 52 'hit' from 1986.  Let's take a look at this week's batch of new entries. 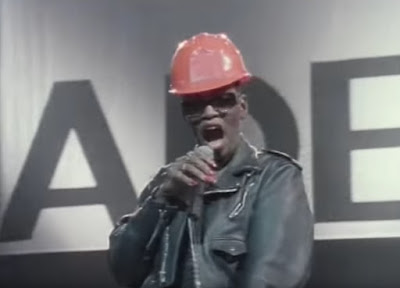 Adeva: No, that's not one of the Village People.
Top 150 debuts:
Number 109 "Paranoimia '89" by The Art of Noise
Peak: number 103
Peak date: 17 July 1989
Weeks in top 150: 6 weeks
The Art of Noise scored a top 10 hit in early 1989 with their collaboration with Tom Jones.  Their original version of this track, featuring the animated robot character Max Headroom on 'vocals', peaked at number 52 on the Australian singles chart in September 1986.  This remixed version, sans Max, peaked 51 places lower, and also flopped in the group's native UK, where it peaked at number 88.

10,000 Maniacs were a band I had heard of - by the early-mid 90s - but never gave their music the time of day, after rather incorrectly assuming they would be some kind of thrash metal act, given the band's name.  How wrong I was!  Accordingly, this excellent song passed me - and most of the Australian record-buying public too, it seems, going by its peak - by at the time.  But, just like the band name, sometimes appearances (and chart peaks) can be deceiving.  Despite only peaking at number 102 - on three separate, non-consecutive weeks, no less - "Trouble Me" spent a whopping 17 weeks hovering in the number 101-150 region of the chart!  Yes, this single was still charting in late October.  This gives "Trouble Me" the accolade (?) of being the single peaking outside the top 100 that spent the most weeks on the chart in 1989, beating its nearest rival, When in Rome's "The Promise", by three whole weeks.  I've raised the question before: when is a flop almost a hit?  The line between 'hit' and 'flop' can sometimes be blurred, indeed.  As impressive as "Trouble Me"'s longevity in the 101-150 region of the chart is, it will be surpassed in later years.

"Trouble Me", lifted from the album Blind Man's Zoo (number 84, August 1989) is another single that had greater success on the Australian Music Report chart, where it peaked at number 85.  It also reached number 37 on the South Australian/Northern Territory ARIA state chart.  The group eventually scored an Australian top 100 hit, in 1997, with their cover version of Roxy Music's "More Than This" (number 94).  Lead singer Natalie Merchant, of course, would have greater success as a solo artist, placing her debut solo single "Carnival" at number 24 in October 1995.  10,000 Maniacs will join us again in 1993.

Tanita's top 30 hit "Twist in My Sobriety" would unfortunately be a one-off for her on the Australian charts; no other single she released troubled the top 100.  We've already seen one of Tanita's bubbling under 'hits' in January.  "Cathedral Song" also under-performed in the UK, relative to Tanita's earlier singles, peaking at number 48 back in January 1989.  A fourth single from the Ancient Heart album, "World Outside Your Window", was released locally in late July 1989, but failed to chart.  Tanita will bubble under for a third time, with a single from her second album, in 1990.

Hipsway were a Scottish band, formed in 1984, and contained Johnny McElhone from Altered Images on bass.  In 1986, they scored a number 91 'hit' on the Australian singles chart with "The Honeythief".  This track peaked at number 66 in the UK in April 1989.

"Your Love" had a somewhat unusual chart run in Australia.  All but one of its seven weeks in the ARIA top 150 were spent at number 137 or lower, but then it randomly shot up to number 103 for a solitary week in its second-last week, before dropping to number 148 and then out.

You'd never guess upon first listen, but this track is a completely re-worked cover version of the song made famous by Aretha Franklin.  I first heard Adeva's rendition of "Respect" when it was used as the B-side to her "Warning!" single - my first musical purchase of the 1990s!  "Respect" has a somewhat interesting chart run in Australia.  Spending just two weeks on the chart, "Respect"'s first charting week was at number 158 back in early April; it took three months to re-enter at its peak of number 150.  Adeva would have greater chart success with later singles from her debut album Adeva!, which, coincidentally, has recently been remastered and re-issued as a 4-CD set (also available to stream on Spotify).  Another thing worth checking out, if Adeva is to your liking, is a recent YouTube interview, where Adeva talks about her career, why she quit the business, and some tragic events that have happened in her life.  Adeva will join us again in 1990.

Before Warrant made it big with "Cherry Pie" in 1990, and before they even had moderate success with their Australian number 54 smash "Heaven" later in 1989, they bubbled WAY down under with "Down Boys", their debut release.  "Down Boys", taken from the album Dirty Rotten Filthy Stinking Rich (number 72, November 1989) had greater success on the US Billboard Hot 100 chart, where it peaked at number 27 in July 1989.  It also peaked at number 50 in New Zealand.  Warrant will bubble down under again in 1990.

Next week (10 July): Four new entries, including a live rendition of a song that peaked just outside the top 40 in 1977; plus another four bubbling WAY down under entries.  Remember, you can also follow my posts on facebook.