Welcome to the first weekly post recapping the new entries on the Australian singles chart that peaked between numbers 101 and 150.  Occasionally, I will also be listing some singles with known peaks outside the top 150.

If you're wondering why I'm not covering new entries within the top 100, there's a whole separate blog devoted to that.

As this was the first singles chart that extended beyond number 100, there are quite a few new entries.  Because it's such a long post, I shall be splitting it into two parts.

Despite it now being late January in 1989, many of the singles below had been released months earlier - some as early as July 1988 - without ever denting the lofty heights of the top 100. 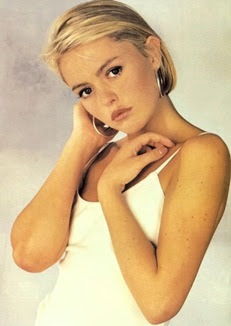 Eighth Wonder: Ah Patsy... never mind the rock star husbands, she could have been a pop icon herself!

Released in Australia in mid-November 1988 to promote their Greatest Hits (number 76, January 1989) album, The Human League's first 'charting' single since 1986's "Human", this one stalled at number 113.  Given that the single had been out for over two months by this point, you have to wonder if it might have peaked nearer to 100 in the interim... but we'll never know.  Interestingly, the song was lifted from their 1986 studio album Crash, rather than being a new recording.  I remember seeing this release reviewed in (the Australian edition of) Smash Hits, and even spotting the cassingle in my local Myer, but never actually hearing the song until 2008.

I've never actually heard this one before.  It's a cover version of a 1963 song recorded by Frankie Laine, and also covered by Cyndi Lauper in both 1980 (with her band Blue Angel) and 1994.

After a string of flop releases, child actor-turned-adult actor-turned pop star (for a short while, anyway) Patsy Kensit and her band Eighth Wonder scored two UK top 15 hits in 1988, with the Pet Shop Boys-penned "I'm Not Scared", and this... a Michael Jay (the man behind Martika's debut album, among other things) written track produced by Phil Harding of PWL (the label owned by Pete Waterman of Stock Aitken Waterman).  With that pedigree, something was bound to give Eighth Wonder a hit eventually - just not Down Under, sadly.

Martika also recorded her own version of this track for her aforementioned debut.  Although Martika technically has a stronger voice, I find something about Patsy's paper-thin vocals really endearing.

This single was released in Oz back in September 1988.  It fared better on the state charts, where it peaked as high as number 56 in New South Wales/ACT in November, and number 58 in South Australia/Northern Territory in December.  That makes me think that it probably would have peaked higher than number 116 on the national chart had it extended beyond number 100 earlier.

I actually read Patsy's autobiography a while back, as I thought she was someone who'd likely had an interesting life (and that's before we get to the numerous rock-star husbands).  In it, she seems a little embarrassed of her pop star phase, never feeling too confident in her singing ability.  It's a shame, as she made a great pop star, I thought.

But this song wasn't all for Patsy and... er, the others on the Australian charts.  They will be back soon enough with another top 150 smash!

I haven't actually heard this one before.  Vocally, it reminds me of Alice Cooper in parts.  The group don't currently have a wikipedia page, so I can't tell you much about them.  Their discogs.com page does not reveal much either... although only an Australian pressing is listed for this single.

Before now, you might have gotten the impression that singles peaking outside the top 100 always peaked where they debuted, but this one actually rose another 6 places to reach its eventual peak of number 114.  Iggy will join us next in 1990.

Another one I was unfamiliar with.  It sounds a bit more easy-listening to me than their earlier hits.  Van Halen will next join us in 1991.

A two-hit wonder in Australia, Glenn also scored a couple of more-minor 'hits'... such as this one, from his curiously-titled Not Me album, which I hadn't heard before either.  Before Glenn's "harder" makeover in 1990, this is more of the same lovey-dovey stuff as you might expect, based on "Nothing's Gonna Change My Love for You".  The music video is just about the most 80s thing ever.  Glenn will visit us again in 1990.

Not being well-versed in country music, particularly of the Australian variety, I had never heard of Graeme Connors before.  Graeme has had several top 100-charting albums in Australia, but only one single, 1975's "Dakota", made a dent in the top 100 singles chart, peaking at number 78.  I don't actually mind "A Little Further North".

More country music.  Not my thing.

Almost bordering on novelty status it was so catchy, it seemed like The Escape Club would have a difficult time following up their 1988 top 10 smash "Wild Wild West" with something as successful.  And this follow-up doesn't sound anywhere as near immediate as its predecessor.  I thought I had seen this once at the time, on either Video Hits or The Factory, but had no recollection of how the song went, which kind of says it all.

Another act having a hard time following up their big 1988 hit - in Australia, anyway - was Climie Fisher.  This was another track I wasn't aware of at the time.  The British duo would be back very soon with another top 150-peaking entry.

When is a flop a sort-of hit?  Despite peaking at only number 103, this single spent 14 weeks in the top 150.  In fact, only one single peaking within the 101-150 range in 1989 spent more weeks on the chart - we'll get to that in July.  This song was particularly popular in Western Australia, reaching number 20 on the state chart, despite not entering any of the other state top 100 charts.  It's funny how tastes could vary so significantly in various regions of Australia at the time.

I probably heard this song on American Top 40, but had no recollection of it when rediscovering it in 2008.  Although the group appear to be a duo, it seems that there is some focus-on-the-more-conventionally-attractive*-band-member-who-isn't-actually-singing going on during the chorus (*though give me a shaved/bald head over Fabio-style locks any day), though he does seem to sing the verses, as I can hear two distinct voices on the track.

Quite a pleasant-sounding track, with a relaxing garden/looking through windows music video to boot.

Released as the follow-up to their top 30 re-recording of "Because I Love You" in 1988, from what I can gather, this was a newly-recorded song.  The reduced price of $1.99 for the single (as evident from the video below) didn't seem to help its chart fortunes much.

Eric's career had a resurgence in 1988 following his inclusion on the Dirty Dancing soundtrack, and a successful follow-up single.  It was a different story for "Reason to Try", though, which stalled at number 87 in the US, and peaked even lower here.

Perhaps of interest to avid chart-watchers, this single spent three consecutive weeks at number 133, which is surely an unusual feat.

Stay tuned for part 2 later this week, which will include entries from a rather famous blonde singer, a cover version of an Aussie 'classic', and a younger artist known for one 'serious'-sounding hit scores with an uncharacteristically upbeat number.