A mixed bag of debuts this week - one by an act with a previous minor hit in Australia, another by an act with a decent-sized hit that they couldn't follow up, an act with a few hits under their belt's final release, and two new acts who would never go on to make the top 100 (at least in their current form).  There isn't really a common thread there that I can write about... so let's just get on to the debuts. 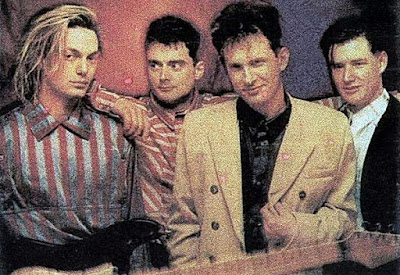 The State: One of them would go on to write non-hits for Collette.

Climie Fisher returned to the top 150 this week, following in the footsteps of "This Is Me" from January,  with their second consecutive single to peak in the 120's.  Two more singles of theirs were released in Australia in 1989: "Love Like a River" (April) and "Facts of Love" (October), but both failed to chart.

This fourth and final single from 1988's Uptown album was also Machinations' final single, after front man Fred Loneragan was injured in a car accident in April 1989.  "Cars & Planes" failed to connect with the record-buying public.

Formed in 1988, UK band King Swamp scaled the lower end of the top 100 in their homeland, reaching number 92 with this track.  In Australia, they did nearly as 'well', but missed the top 100.

Before roping in Jack Jones (real name Irwin Thomas) and morphing into Southern Sons, The State had their first taste of chart 'success' with "So Lonely Now", which spent a solitary week at number 150.   CD copies of their album Elementary fetch upwards of $70 on discogs.com now!  Interestingly, Peter Bowman from the group would later go on to co-write most of Collette's second album, Attitude.


Number 159 Ballad of the Streets EP by Simple Minds
Peak: number 159
Peak date: 27 February 1989
Weeks on chart: 1 week
From time to time, I notice what I think (sometimes it's clear; other times, more a matter of opinion) are mistakes on the ARIA chart.  This is one of them.
Ballad of the Streets was the name - across all formats - given to the single containing the track "Belfast Child" by Simple Minds.  However, the single cover also listed "Belfast Child" and the other track(s) - depending on which format, so there was no mistake it was the 'Belfast Child single' if you were browsing the stock in a record store.
My only guess - and it is just a guess - as to why ARIA have listed Ballad of the Streets separately to "Belfast Child", which was at number 23 this week, is that it represents sales of the 12" vinyl or CD single, with extra track "Biko" on it.  Sales of the 12" or CD single really should have just been added to the tally for "Belfast Child".
We will next see Simple Minds in 1992.
Number 166 "Eyes for the Blind" by The Everys
Peak: number 166
Peak date: 27 February 1989
Weeks on chart: 1 week
Adelaide band The Everys only released one studio album, Everyone, which did not chart at its time of release, in February 1989.  It did, however, manage to chart... at number 1280, in June 2018, following its digital release.  I suspect the album would have peaked higher in 1989 had the chart extended lower back then.
"Eyes for the Blind" was the third of four singles issued from the album; the other three - "This Town" (January 1988, released as The Every Brothers), "Paved with Gold" (July 1988) and "Stranger You Are" (July 1989) - did not chart.
Number 175 "Four Letter Word" by Kim Wilde
Peak: number 165
Peak date: 13 March 1989
Weeks on chart: 3 weeks
Poor Kim could only manage sporadic chart success in Australia, after her string of four consecutive top 10 singles in 1981-2.  A four letter word is what Kim might be thinking if she looked at her Australian chart history... though we at least gave her a number one hit - something she somehow couldn't manage in her home country - in 1987.  Kim will join us next in 1990.


Next week (6 March):  Another 5 new top 150 entries, though one of them isn't really 'new'.  Other acts debuting next week include another return act, and a double A-side from a female rap act who looked like they were going to become one-hit wonders.

Please note that next week's post will be on Friday, rather than Thursday, due to the leap day this year.  My posts for the next 4 years (assuming I continue writing these posts) will now be on a Friday.