In my last post, I mentioned that there exists an unpublished ARIA top 50 singles chart, that was presumably compiled as a test-run before going 'live' the following week with the first published ARIA-produced top 50 chart.

Although the first published top 50 chart is dated 'week ending June 26, 1988', it actually reflects the chart survey conducted by ARIA on Monday 13 June 1988, covering sales from the week prior.  During the transition from the Australian Music Report (formerly Kent Music Report) chart, ARIA kept the week-ending dates on the top 50 chart a week after the chart survey was conducted, in keeping with AMR method of dating their charts, right up until the end of 1988.

So... this unpublished chart from the week prior reflects the chart survey conducted on 6 June 1988.  Had the chart been used on the printed top 50 ARIA charts available in record stores, it would replace the chart dated week ending June 19, 1988.

Of interest to chart-watchers, this unpublished chart actually results in a couple of different peaks, highlighted in orange on the chart below: 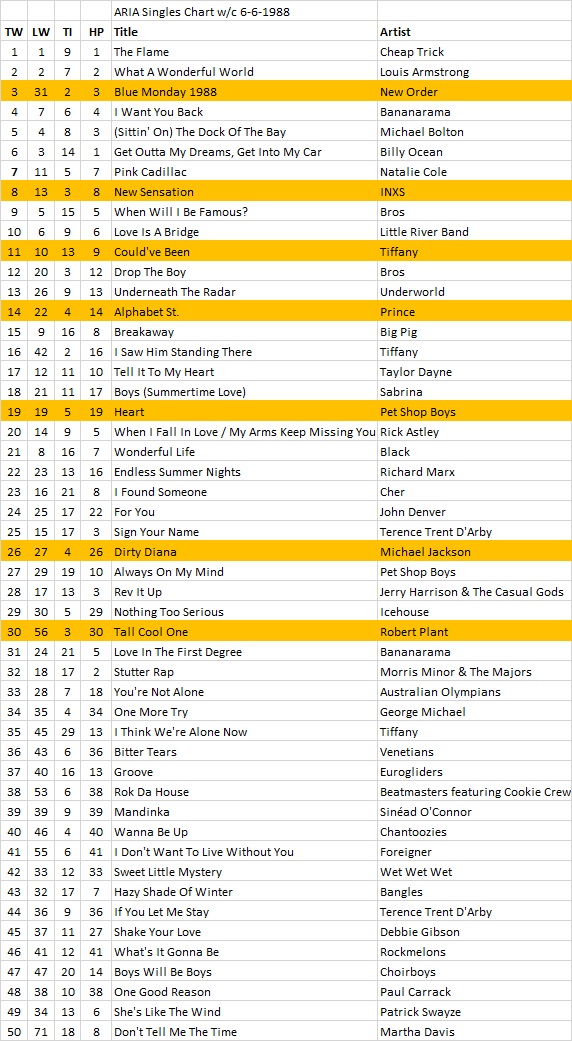 Is this unpublished chart considered 'official'?  Should these 'new' peaks replace the old ones?  My opinion is 'yes' to both, because ARIA produced this chart.  I am not sure why it was not used in place of the last AMR chart ARIA licensed, for the week ending June 19, 1988 top 50 printed chart.  I'm guessing that maybe ARIA wanted to have a trial-run at it first, before going 'live'.
Posted by Bubbling Down Under at 20:33