Excluding the original release of one of this week's new entries, 5 of the 6 debuts (not counting the Bubbling WAY down under entry - though that too would qualify) charted no higher than number 61 anywhere in the world.  Furthermore, four of the tracks I write about this week didn't chart anywhere else - on a real chart, I mean.  Yay for Australia giving these flops a go!  Let's take a look at this week's entries: 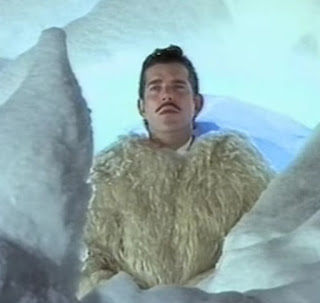 Yello: Of course I'd be lying if I said I didn't want to wear a bear suit in a music video.

Five years before his breakthrough duet hit with Neneh Cherry, Senegalese singer Youssou N'Dour made his Australian singles chart debut with another duet; this time with Peter Gabriel, who we last saw on the chart in 1987.  "Shakin' the Tree" was lifted from N'Dour's album The Lion.  It would also become the title of Gabriel's 'greatest hits' collection released the following year (albeit as Shaking the Tree) - although the title track wasn't exactly a chart 'hit' anywhere, with number 61 in the UK being its highest chart placing anywhere that I am aware of.  Youssou N'Dour will join us again in 1994.  Peter Gabriel will next join us in 1991.

Number 136 "Planet Texas" by Kenny Rogers
Peak: number 129
Peak date: 7 August 1989
Weeks in top 150: 6 weeks
Weeks on chart: 7 weeks
The recently-departed Kenny Rogers was last on the Australian singles chart in 1985 with "Real Love", a duet with Dolly Parton.  "Planet Texas" was the lead single from his album Something Inside So Strong, which peaked at number 133 on the ARIA albums chart in June 1989.  Interestingly, this single did not chart anywhere else (I do not count the US and Canadian Country charts as real charts). We will see Kenny again in 1990.

Number 144 "Crescendo" by Tim Finn
Peak: number 120
Peak date: 24 July 1989
Weeks in top 150: 8 weeks
Weeks on chart: 8 weeks
Tim had scored four solo top 40 singles in Australia; the largest of those being 1983's "Fraction Too Much Friction", which peaked at number 8.  The second single from Tim's self-titled album, "Crescendo" followed up his number 27-peaking "How'm I Gonna Sleep" from earlier in the year.  "Crescendo" did not chart anywhere else, and Tim would never again score another solo top 40 hit in Australia.  Tim will join us again in 1990.
Number 148 "Of Course I'm Lying" by Yello
Peak: number 123
Peak date: 14 August 1989
Weeks in top 150: 12 weeks
Weeks on chart: 13 weeks
Swiss duo Dieter Meier and Boris Blank formed Yello in 1979.  The pair landed their first 'hit' on the Australian chart in 1985, when "Vicious Games" reached number 51 in September of that year.  "Oh Yeah", Yello's biggest hit by far in Australia, peaked at number 9 in September 1988.
"The Race", the first single lifted from Yello's sixth studio album Flag (number 94, February 1989), spent three consecutive weeks at its peak of number 56 in September 1988.  The album's second single, "Tied Up", was issued in Australia in March 1989, but failed to chart.
"Of Course I'm Lying", the third single from Flag, is a song about how much you love when your partner lies to you... and is just the kind of thing only Yello would think of doing.
"Of Course I'm Lying" fared much better in the UK, where it peaked 100 places higher, at number 23.  The single also performed stronger on the Australian Music Report chart, where it peaked at number 86.
On the ARIA state charts, "Of Course I'm Lying" performed strongest in South Australia/Northern Territory, where it reached number 61.   The single did not make the top 100 on any of the four other ARIA state charts.
Despite its low peak in Australia, "Of Course I'm Lying" had one of the longer chart runs for a single peaking outside the top 100, spending 12 weeks within the top 150.  Yello are still going, and released a new single just recently.
We will see Yello next in 1991.

Bubbling WAY down under:
Number 158 "(He's Got) The Look" by Vanessa Williams
Peak: number 158
Peak date: 17 July 1989
Weeks on chart: 1 week
We saw Vanessa Williams back in April, with her first Australian chart 'hit' "Dreamin'", and here she was with the follow-up... locally, anyway.  "(He's Got) The Look" was actually released before "Dreamin'" in the US, where it reached number 10 on the R&B chart (again, not a real chart in my book) in October 1988, and seems to have not charted anywhere else.  We will see Vanessa next in 1991.


Next week (24 July): Among the seven new top 150-peaking entries next week, we have not one, but two singles that peak at number 101, and one that peaked at number 102!  There is also one bubbling WAY down under debut.  You can also follow my posts on facebook.