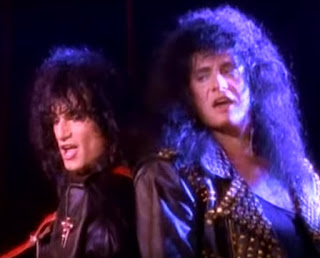 Peaking 100 places lower than the title would suggest, I've written about this "one" previously in my special post on singles peaking at number 101 between 1989 and 1991.  "One" was the second single lifted from the album One, and followed up "Ordinary Lives", which we saw in May.  "One" was a much bigger hit in the US, where it peaked at number 7.  Bee Gees (note: no 'The') will join us again in October.

Coincidentally, here's another single that peaked at number 101, which I have also already written about.  The second single lifted from their Smashes, Thrashes & Hits greatest hits compilation, the subtly-titled (!) song failed to register on a reputable national chart anywhere, that I am aware of, other than coming within a whisker of making the ARIA top 100.  But, such is the size of their fan-base that the music video (embedded below) currently has over 5.5 million views on YouTube, in spite of being a flop single.  Kiss will join us again in 1990.

Former frontman of The Who, Pete Townshend was last on the Australian singles chart in 1986 with "Give Blood", peaking at number 77.  Immediately prior to that, he scored his biggest, and only real, solo hit single down under with "Face the Face", which peaked at number 9 in Australia in February 1986.  This track was lifted from The Iron Man: The Musical by Pete Townshend, which peaked at number 59 on the ARIA albums chart in July 1989.  "A Friend Is a Friend" did not manage to chart anywhere else.

Follow-up to Australian singer-songwriter Clive Young's single "Something Special" (number 50, June 1989), "Naturally" narrowly missed the top 100.  "Naturally" follows in much the same vein as its predecessor.  Oddly, Clive did not release an album until 1992, and neither "Something Special" nor "Naturally" appear on it, owing to Clive changing record labels in the interim.  The rear sleeve of the "Naturally" single states that the song is from the forthcoming album Naturally, but this does not appear to have ever been released.  We will see Clive again in 1992.

Britain-based American singer Brix Smith formed Adult Net as a side project after joining The Fall in 1983.  "Take Me" peaked at number 78 on the UK singles chart in March 1989, and was lifted from the album The Honey Tangle.  Given that nothing released by the group peaked higher than number 66 anywhere in the world, I am pleasantly surprised that this one even registered on the Australian charts - especially since I wasn't aware of it at the time.

When writing the 'next week' preview blurb on last week's post, I was going to write that we would see the arrival of a new hair metal act... except Skid Row weren't exactly 'hair metal', were they?  When googling to see what genre the group's music is considered being (Metal? Hair metal? Rock?), I came across a comment that Skid Row were the missing link between 80s hair metal and 90s grunge, and I think that is an apt description.  One thing I vividly remember from this period is that the cassette sleeve for their album Skid Row (number 12, May 1990) was one that had been replaced by a photocopy in a record store I visited, "to prevent theft".  What that says about their (presumably teenage) fans of the time, I don't know.  Now, onto the song itself, this was the group's debut release, peaking at number 99 in the US in June 1989, and number 42 in the UK in November 1989.  I am surprised that "Youth Gone Wild" didn't perform better on our chart, as I remember hearing it and seeing the video several times (and I was not a 'metal' kid).  Perhaps their fans were stealing the single instead of buying it...  We will see Skid Row again in December.

Now, for something less-ambiguously glam 'metal', "Little Fighter" was White Lion's first foray onto the Australian singles chart, although they would never reach the top 100 with any single or album.  Lead single from the band's third album, Big Game - which peaked at number 119 on the ARIA albums chart in August 1989 - "Little Fighter" peaked at number 52 in the US.  We will see White Lion again in December.