A big eleven new entries this week, from a varied bunch of artists.  Let's take a look at them: 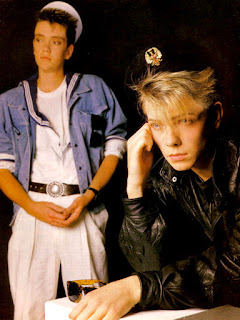 Somewhat surprisingly, the Australian top 100 singles charts were a hit-free zone for Pretenders for almost 7 years, book-ended by two top ten hits - those being 1987's "Hymn to Her", and 1994's "I'll Stand by You".  They did managed to 'bubble under' with this track, though, and with two more singles released in 1990.  "Windows of the World" was recorded for the 1969 soundtrack.

This track is lifted from the Busted soundtrack, and was written by Phil Collins and Lamont Dozier.  I remember seeing the video for this one on rage while waiting for the top 50 chart countdown to begin, early on a Saturday morning. This was the group's first Australian singles chart entry since "When She Was My Girl" peaked at number 54 in early 1982.

The first and only Australian singles chart entry for this Canadian rock band has a rather interesting back-story.  The song was originally released as a single in 1983 - although I can find no evidence of it being released locally then.  The band split in 1985, and after a radio station in the US began playing the song in late 1988, it was re-issued there (after having peaked at number 61 in 1983).  It then went on to top the US Billboard Hot 100 chart in February 1989, despite having no music video.  Another claim made about this song is that the note held at the end of it is the longest (19.3 second) note held by a male pop singer on record.  Phew!  As if all of that wasn't enough, two of the band's members went on to form part of Alias, who would score a hit in 1991 with "More Than Words Can Say".

Australia's Party Boys scored a big number one hit in 1987 with their version of "He's Gonna Step on You Again", but would have to settle for bubbling under the top 100 with this release, less than two years later.  While it's not the sort of thing I normally listen to, I concede that the chorus is catchy.  Despite peaking at number 107, this single spent 11 weeks in the 101-150 section of the chart.

A certain Scandinavian duo hailing from Sweden would conquer the Australian charts in 1989, but this duo, originating in Norway, couldn't manage to crack the top 140.  It's a shame, really, as this is quite a good slice of infectious pop music that I hadn't heard before.  I wonder who knew about it locally to snap up sufficient copies of it to dent the top 150?  The duo had greater success in their homeland, where this reached number 4.

Despite forming in 1979, this was actually the Australian band's first taste of chart 'success'; albeit, at a rather modest level.  They'll go on to visit the 101-150 section of the singles chart on no fewer than three other occasions in the coming three years.

This is another one I'd never heard of before.  Buckwheat, born Stanley Dural, Jr., was an American accordionist.  I say 'was', because he sadly passed in 2016.  This track is a cover of a track by Eric Clapton's band Derek & The Dominoes, from 1970.  Oddly, this version by Buckwheat Zydeco does not appear to have charted elsewhere - I've no idea why it 'charted' in Australia.

Another track I'd never heard before, though I was familiar with Shane via his massive hit with Goanna, 1982's "Solid Rock", and the handful of minor top 50 hits he had locally in 1990-1991.  This release appears to have been his first solo single, and was the title track of his Back to the Track (number 111, March 1989) album.

We will next see Shane in 1991.
Bubbling WAY down under:
Number 160 "Fake 89" by Alexander O'Neal
Peak: number 160
Peak date: 13 March 1989
Weeks on chart: 1 week
American r&b singer Alexander O'Neal's recording career almost began in 1980 as a member of The Time, a band that would be signed under a clause in Prince's recording contract with Warner Brothers Records.  However, Alex was replaced by Morris Day following a dispute with the purple one.
Alex's first solo album Alexander O'Neal, partly produced by James Harris and Terry Lewis, was released in 1985, but does not appear to have received an Australian release (it did, however, receive a New Zealand one).
Alex's second album Hearsay (number 142, March 1989) was released in Australia in August 1987, led by the original release of "Fake" in June 1987.  "Fake" failed to chart in Australia, but bubbled under on the Australian Music Report's list of singles receiving significant sales reports beyond the top 100, reaching fifth place on the list in August 1987.  The 1987 release of "Fake" became Alex's biggest hit on the US Billboard Hot 100, reaching number 25 there in September 1987.
The second single from Hearsay, "Criticize", was issued locally in November 1987, but failed to chart.  In contrast, "Criticize" was Alex's biggest hit in the UK, peaking at number 4 there in December 1987. "Criticize" is also my favourite Alexander O'Neal song that I have heard.
The Hearsay album spent 40 weeks on the US Billboard 200 chart, despite only peaking at number 29, and similarly spent 103 weeks on the UK albums chart, where it reached number 4.  Owing to the album's chart longevity, a string of singles was released from the album (though not in Australia), including "Never Knew Love Like This", a duet with Cherrelle.
Alex had previously dueted with Cherrelle on "Saturday Love", which was Alex's first release in Australia in April 1986, though it failed to chart here.  "Saturday Love" reached number 6 in the UK in January 1986.
As the 1987 issue of "Fake" only reached number 33 in the UK in June 1987, a remixed version of the single was released in September 1988, to promote the remix album Hearsay - All Mixed Up.  "Fake 88" peaked at number 16 in the UK in October 1988.  As there was often a several month delay between European and Australian releases back then, it was 1989 by the time "Fake 88" was issued in Australia, and, accordingly, its title was adjusted to "Fake 89", although it was the same remix.
Unfortunately for Alex, he never landed a top 100 single or album in Australia.  We will see him bubble under on a few more occasions, though, with the next one being in 1991.
Number 164 "Little Liar" by Joan Jett and The Blackhearts
Peak: number 164
Peak date: 13 March 1989
Weeks on chart: 1 week
Having not listened to this track until writing this post, I am surprised by how similar the music and chord progressions are to Cher's "I Found Someone" (originally recorded by Laura Branigan in 1985).  "Little Liar" was released as the second single from Up Your Alley, following "I Hate Myself for Loving You" - both of which failed to chart in Australia, to my surprise.  This track had greater success in the US, where it peaked at number 19 on the Billboard Hot 100 in January 1989.
We will next see Joan and the gang in 1994.
Next week (20 March): just 3 new entries - among them is a young star from 1988 whose 15 minutes looked like they were already up; and a bubbling WAY down under debut from another teen artist who would go on to be massive later on in the year.

Posted by Bubbling Down Under at 19:58