There are a mere three debuts peaking within the 101-150 section of the chart this week, with no real common thread between them, other than (once we include the bubbling WAY down under entry) we have both a fading teen star and a new one on the rise. 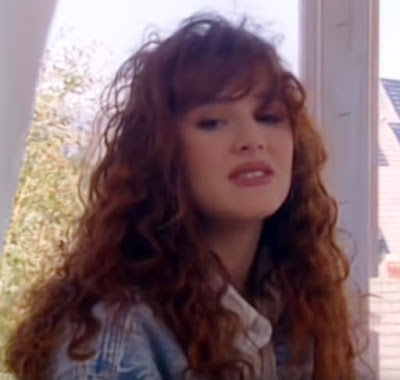 Tiffany: Tiff was rocking the double denim, if not the Australian charts, in 1989.
Top 150 debuts:

Tiffany's Australian chart career started on a high, with three consecutive top 15 hits.  But single number four bombed, and the lead single from her second album (at least in Europe and Australasia) Hold an Old Friend's Hand stalled at number 65.  Tiffany's Oz chart trajectory continued its steep decline with this, the second single (though first in the US) from the album, "All This Time".  Is it just me, or does Tiff sound like she has a cold on this track?  I also thought the same thing about her vocals on "Radio Romance".

If you thought this would be Tiffany's last foray into the Australian charts, you would surprisingly be wrong.  She has a bubbling WAY down under 'hit' coming up later in the year, and will be seen again in 1990 and 1993!  Who knew?!

This single was the Pogues' first appearance on the Australian singles chart, although an earlier-released single dueting with Kirsty MacColl would more-recently nudge the top 50.  I assume the "I love your breasts, I love your thighs" lyrics are not referencing KFC...   The Pogues join us again in 1990.

Before the term 'catfish' meant someone trying to trick you into an online relationship by using somebody else's pics, it was the name of an Australian band, who scored a number 72 'hit' in Australia in late 1988 with "The Early Hours".  This follow-up didn't do quite as well.  While it's not the sort of thing I'd normally listen to, I think this track is pretty decent.  Catfish will join us again in 1991.

Some readers may have known that before "Toy Soldiers" became an international smash hit for Martika, she had some more-subdued success with her debut single, "More Than You Know", which peaked at number 18 in the US in April 1989.  While the single would go on to peak at number 32 in Australia when re-issued in January 1990, upon its initial release, "More Than You Know" debuted at number 160 this week on the Australian singles chart.

Next week (27 March): we have six new entries, including an ex-member of Frankie Goes to Hollywood - though it's not who you might think.