Half of this week's six debuts peaked exactly at the same position where they entered, so the only way is not always up!  I didn't know any of this week's new entries at the time, so let's see what I think of them now... 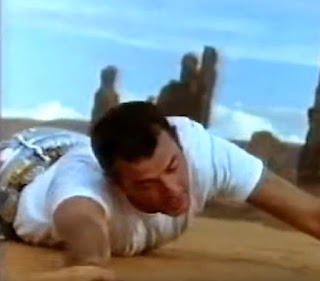 Paul Rutherford: The way to 'get real' in the late 80s was apparently to frolic around in the desert.
Debuts:

Ex-Frankie Goes to Hollywood member Paul Rutherford launched his solo "career" with this track.  I say "career" in inverted commas as it didn't really take off.  This track peaked at number 47 in the UK back in October 1988, which is as good it got for solo Paul Rutherford on the chart.  I am rather partial to the even less-successful follow-up (as is often the case for me) - a cover version of Chic's "I Want Your Love", which did not chart at all in Australia, sadly.  Both tracks were produced by Mark White and Martin Fry, who were the sole remaining members of ABC by this point.  Paul's more vocally-gifted former band mate Holly Johnson, of course performed much better with his solo debut, although his solo career was also short-lived.

Like Paul Rutherford, this single flopped in the UK in 1988 - peaking at number 81 in August 1988.  Ah, the days when it took six months for something to finally get released in Australia... The album did better in the UK, though, peaking at number 39.  While not exactly immediate, this song has a rather pleasant vibe, I think.

Serving this week's most 80s hair-dos, Vixen's biggest hit (number 22) in their native America had to settle for a peak outside the top 100 in Australia; although it peaked at number 76 on the rival Australian Music Report chart (what's 45 positions' difference here or there, eh?).  Vixen will join us again in August.

Another one that performed much better on the Australian Music Report singles chart is this one, which peaked at number 87 on it, while number 144 is all it could muster on the ARIA chart.  Despite that, it did spend four non-consecutive weeks hovering between numbers 144 and 147, with one week apiece spent at 144, 145, 146 and 147!  Oddly, this one did not enter the band's native UK chart until August 1989, where it peaked at number 54.  Quite a nice, if not spectacular, song.

Now here's a spectacular song - or so I think.  I discovered this one last year, via a 'song contest' (where you submit a song that didn't chart so well, if at all, by an obscure-ish artist) on a pop forum.    Rainbirds are a German band, and this single peaked at number 7 in their homeland in February 1988.  It also performed much better on the Australian Music Report chart, where it peaked at number 96.  On the ARIA chart, the single interestingly spent three non-consecutive weeks at number 149!

On the ARIA state charts, "Blueprint" performed strongest in South Australia/Northern Territory, where it reached number 70.

Although "Blueprint" would be Rainbirds' only single to chart in Australia, they had one (their only) charting album later in the year.  Their second album Call Me Easy Say I'm Strong Love Me My Way It Ain't Wrong (now that's a mouthful!) peaked at number 138 on the ARIA albums chart in October 1989, despite no singles from it charting in Australia.

The Pony were a short-lived Australian band, going by their brief bio on discogs.com.  This song is pleasant with a catchy chorus, though is not what I'd normally listen to.  It sounds like it might have done better if released in about 1993.


Next week (3 April): A mere four new entries, including... some Christian metal and a duet with a (then) recently-deceased singer.  Don't forget, you can also follow my posts on facebook.