Before diving into this week in 1991's post, I need to apologise for not starting my 1982 beyond number 100 chart recaps on Tuesday, as hinted at last week.  The reason for this is - after checking with my scans of the Kent Music Report - the 'Hit Predictions' list (as it was then known) incorporated radio and TV playlists into the list, so it was not entirely sales-based.
As regular readers of my posts will know, I don't normally credit any chart that was not sales-based, with the only exception being (begrudgingly) the US Billboard Hot 100, which was based on a combination of sales and airplay.  Additionally, the first few months of the 1982 Hit Predictions lists were organised in alphabetical order by song title, rather than sales rank (though I knew that already), so I would not have been able to give ranked placings for singles making this list.
Rest assured that my 1982 chart recaps will commence on 30 August, when the 'singles receiving significant sales reports beyond the top 100' list begins.  In the interim, I will be returning to 1981 on 27 April to fill in April-September 1981, which I missed last year when I started my 1981 beyond number 100 chart recaps.
Also, before we look at this week in 1991's new entries, I have updated two earlier posts with the following: 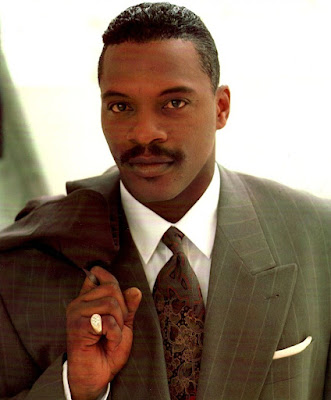 Alexander O'Neal: dressed for business, but not on the Australian charts.
Top 150 debuts:
Number 142 "All True Man" by Alexander O'Neal
Peak: number 142
Peak date: 25 March 1991
Weeks in top 150: 1 weeks
Weeks on chart: 3 weeks
We saw American singer Alexander O'Neal back in March 1989 with his first single to chart in Australia.  "All True Man", another Terry Lewis and Jimmy Jam production, was the lead single from Alex's third studio album proper All True Man (number 108, April 1991), not counting his 1988 Christmas album My Gift to You.
Internationally, "All True Man" peaked at number 18 in the UK in January 1991, number 20 in the Netherlands in March 1991, and 43 in the US in April 1991.
Domestically, "All True Man" performed strongest in New South Wales/Australian Capital Territory, where it reached number 127.  The album also performed significantly better in New South Wales/Australian Capital Territory than it did nationally, peaking at number 55 there.
I hadn't heard this one before.  I don't mind it, but it doesn't seem as strong to me as the singles from Alex's previous album Hearsay (number 142, March 1989).
We will next see Alex in June 1991.
Number 145 "Move to the Bigband" by Ben Liebrand featuring Tony Scott
Peak: number 117
Peak date: 29 April 1991
Weeks in top 150: 7 weeks
Here's another one I didn't know at the time.  We last saw Dutchman Ben Liebrand in September 1990 in his own right, though one of his many remixes for other artists appeared in November 1990.  This time, Ben teamed up with Dutch rapper Tony Scott (real name Peter van der Bosch).
"Move to the Bigband" peaked at number 15 in the Netherlands in September 1990, and number 84 in the UK in November 1990.
Tony Scott was diagnosed with multiple sclerosis in 2015 and retired from performing the following year.
Ben will next join us in September 1991, though he is credited as a remixer only on that track.
Number 146 "If You Don't Start Drinkin' (I'm Gonna Leave)" by George Thorogood & The Destroyers
Peak: number 109
Peak date: 6 May 1991
Weeks in top 150: 9 weeks
George Thorogood was one of those artists whose name I'd heard mentioned numerous times - thanks to Victorian FM radio stations' classic rock fixation in the early 1990s - but whose music I was unfamiliar with, until he landed a hit with "Get a Haircut" (number 28, September 1993) in 1993.
"If You Don't Start Drinkin' (I'm Gonna Leave)" was lifted from George and the gang's eighth studio album Boogie People (number 45, April 1991).  Although the group had landed eight albums on the Australian top 100 chart dating back to 1978, only one of their previous singles, "Treat Her Right" (number 74, July 1988), charted in Australia.
Internationally, "...Drinkin'..." peaked at number 5 on the US Mainstream Rock Tracks chart (a meaningless chart, in my opinion) in April 1991.
Number 147 "Doctor Jeep" by The Sisters of Mercy
Peak: number 125
Peak date: 13 May 1991
Weeks in top 150: 9 weeks
Here's another one I had not heard before.  English band The Sisters of Mercy formed in 1980.  Despite notching up nine UK top 75 singles by this point, The Sisters of Mercy had only ever placed one single on the Australian chart previously, with "More" (number 74, February 1991).  "Doctor Jeep" followed-up "More", as the second single from the band's third studio album Vision Thing (number 73, March 1991).  This was the band's final studio album to date, owing to extended wrangling with their record company EastWest.  The band are still together, however.
Internationally, "Doctor Jeep" peaked at number 37 in the UK in December 1990, and number 45 in Germany in February 1991.
We shall next see The Sisters of Mercy in 1993.
Bubbling WAY down under:
Number 155 "I Can't Take the Power" by Off-Shore
Peak: number 155
Peak date: 25 March 1991
Weeks on chart: 9 weeks
Off-Shore were German DJ Jens Lissat and recording engineer, producer and musician Peter Harder.  "I Can't Take the Power", their first release, contained vocal samples from Class Action's "Weekend" (the "I can't take" line) and Jocelyn Brown's "Love's Gonna Get You" ("the power" line).  The latter track was prominently sampled on Snap!'s "The Power" (number 13, August 1990), and (I didn't realise until now) on a song we will see in 1992.
Internationally, "I Can't Take the Power" peaked at number 7 in the UK in January 1991, number 11 in Ireland, and number 77 in the Netherlands in April 1991.  Surprisingly, it did not chart in the duo's native Germany.
In Australia, "I Can't Take the Power" performed equally strongest in South Australia/Northern Territory and Western Australia, where it reached number 131.  Nine weeks spent on the chart is a lot for a single that missed the top 150 in 1991, when the chart does not appear to have extended far beyond number 200 at any point in the year.
I have embedded two videos for "I Can't Take the Power" below.  The second (blocked on YouTube) is the 'official' music video, although it is made up of footage from other artists' videos, including C + C Music Factory's "Gonna Make You Sweat (Everybody Dance Now)" and Malcolm McLaren's "Deep in Vogue".  Also, this video fades out at the 2 minute mark - I suspect it was thrown together for airing on Top of the Pops during the chart countdown.
Next week (1 April): Three top 150 debuts and one bubbling WAY down under entry.
< Previous week: 18 March 1991                                  Next week: 1 April 1991 >
Posted by Bubbling Down Under at 00:00