Those of you who are regular readers (there must be some?) of this site would have seen me refer to the Kent Music Report lists of 'singles receiving significant sales reports beyond the top 100' on numerous occasions.  Well, I decided, on a whim, to start re-capping those 'charts', in addition to my regular weekly posts on singles peaking outside the ARIA top 100 singles chart.
For those of you who are not au fait with the different charts that were published in Australia, the Kent Music Report, named after its creator, David Kent, began publishing national top 100 charts in May 1974.  The Australian Record Industry Association (as it was then known), i.e. ARIA, licensed the top 50 portion of the Kent Music Report chart in June 1983, and these printed top 50 charts were available free to take home in record stores.
The Kent Music Report was re-branded the Australian Music Report in July 1987.  ARIA's licensing arrangement with the Kent/Australian Music Report chart came to an end in June 1988, and then ARIA commenced producing the chart themselves, in-house.  The Australian Music Report continued being published up until January 1998.  Between June 1988 and January 1998, the two charts existed alongside each other, although the ARIA chart was the self-proclaimed 'official' Australian chart.
In April 1981, the Kent Music Report started publishing a list of 'predictions for national top 100 singles'.  These were listed beneath the top 100 chart, and I have uploaded an image of the first one for you to see: 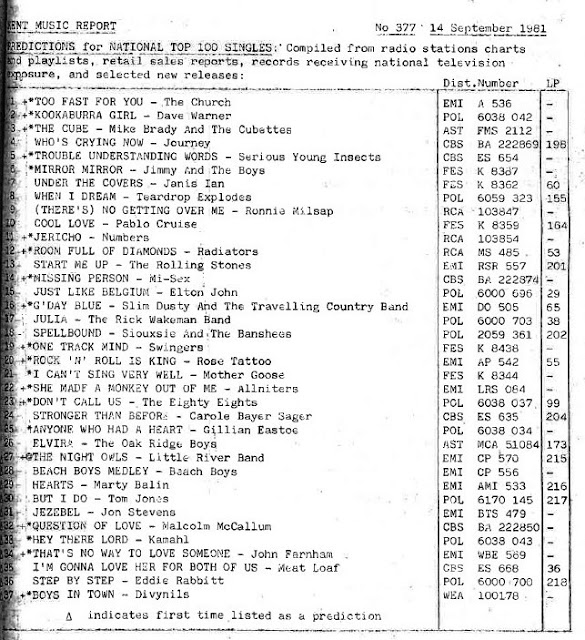 Titles were ranked in order of sales, but were not literally positions 101, 102, 103, etc.  These lists are therefore analogous to the US Billboard Bubbling Under chart, which was an inspiration for naming this site.  The list was re-branded a list of 'singles receiving significant sales reports beyond the top 100' in August 1982.
The lists are also similar to the 'Breakers' lists that appeared on the printed top 50 ARIA charts between January 1986 and August 1992.  The Breakers lists were a list of the five highest-selling singles that week which were moving up the chart outside the top 50.
The Kent Music Report 'predictions' and 'significant sales reports...' lists differ to the Billboard Bubbling Under chart and the ARIA Breakers, however, in that they often contained titles that had just fallen out of the top 100.  I am not sure why David Kent decided to include such titles.
In keeping with the purpose of this site, I will mostly write about singles that never broke into the national top 100, and occasionally about those that 'bubbled under' some time before they debuted on the top 100.
Long intro out of the way, let's take a look at what was bubbling under this week in 1981.  In case you are wondering, I will cover the April-early September 1981 Kent Music Report Predictions lists at some point in the future, though I have not yet determined when. 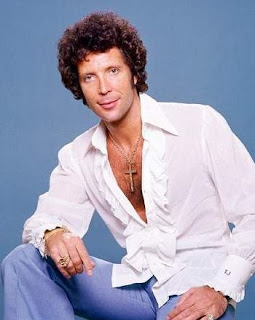 Tom Jones: but I do a mean Mike Brady impersonation.
Beyond the top 100:
Position 30 "But I Do" by Tom Jones
Highest rank: 19th
Peak dates: 28 September 1981, 5 October 1981, 12 October 1981 and 19 October 1981
Weeks on below list: 6 weeks
"But I Do" was the third single lifted form Welsh singer Tom Jones' album Darlin'.  The track is a cover version of Clarence "Frogman" Henry's "(I Don't Know Why) But I Do".
Tom's career was in a commercial lull at this point, with his last major hit being in 1972.  "But I Do" did not even chart in the UK - or anywhere else for that matter, it seems.  Tom would have to wait until 1987 to score another top 10 hit in the UK, and he would not place another single on the Australian chart until teaming up with The Art of Noise in 1989.
Position 32 "Question of Love" by Malcolm McCallum
Highest rank: 11th
Peak date: 28 September 1981
Weeks on below list: 4 weeks
New Zealand singer-songwriter Malcolm McCallum - not to be confused with Malcolm McLaren - never managed to land a single on the Australian top 100.  He did, however, place one album within the top 100, when Victim in Paradise peaked at number 96 in April 1980.  Oddly, none of Malcolm's releases made the top 50 (as far as the New Zealand chart is calculated, it seems) in his homeland.
"Question of Love" sounds like the sort of pleasant, easy-listening song that could have been a huge hit in the early 1980s.  I'm not sure why it didn't perform better on the chart; I assume a lack of radio/TV support is to blame.
"Question of Love" was Malcolm's only single to register on the Kent Music Report.
Next post (28 September): As there are no new titles on the Kent Music Report Predictions list from 21 September 1981 that missed the top 100, my next post on this chart will be on 28 September, where there are three new entries.  Stay tuned!
Next post: 28 September 1981 >
Posted by Bubbling Down Under at 18:39