The only common theme I can identify from this week in 1991's batch of new chart entries peaking outside the ARIA top 100 is that they are all from artists who are not Australian.
Before we take a look at this week's new entries, I have updated some earlier posts with the following:

You may also have missed that I resumed my 1981 Kent Music Report beyond the top 100 recaps this week.  These will posted on Wednesdays. 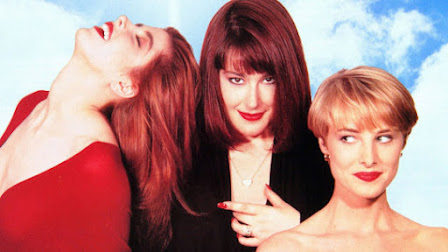 Wilson Phillips: Australia was not in love with their latest single in 1991.
Top 150 debuts:
Number 138 "You're in Love" by Wilson Phillips
Peak: number 108
Peak date: 27 May 1991
Weeks in top 150: 7 weeks
Weeks on chart: 10 weeks
We last saw Wilson Phillips in December 1990.  "You're in Love" was the fourth single lifted from the group's debut album Wilson Phillips (number 7, July 1990), and gave the girls their third US Billboard Hot 100 number one single in April 1991.  The single also peaked at number 3 in Canada in April 1991, and within the top 30 in the UK and Ireland, the top 40 in the Netherlands and the Flanders region of Belgium, and at number 54 in Germany.
In hindsight, I find it interesting that none of the post-"Hold On" (number 2, July 1990) singles from the Wilson Phillips album dented the top 50 in Australia, and three of the album's singles peaked outside the top 100.  Though, as I wrote last time, the Wilson Phillips sound was probably a bit too squeaky clean for the Australian market, one large hit aside.  Furthermore, I only recall hearing "You're in Love" on the American Top 40 radio show.
We'll next see Wilson Phillips in October 1991.
Number 142 "Stranger Than Fiction" by Joe Jackson
Peak: number 119
Peak date: 1 July 1991
Weeks in top 150: 10 weeks
We last saw English singer-songwriter Joe Jackson in July 1989.
"Stranger Than Fiction" was the lead single from Joe's eleventh studio album Laughter & Lust (number 57, September 1991).  The single missed the UK top 75, but peaked at number 53 in Germany in June 1991, and at number 71 in the Netherlands in May 1991.
In Australia, "Stranger Than Fiction" took ten weeks to reach its peak in the top 120, and then fell out of the top 150 the following week.
The music video for "Stranger Than Fiction", embedded below, portrays Joe as being totally disinterested in the 'hot' women, typical of those appearing in male artists' music videos around this time, surrounding him.  Perhaps Joe was dropping some not-so-subtle hints about his own sexuality here.
We shall next see Joe in September 1991.
Bubbling WAY down under:
Number 167 "Can You Dig It?" by The Mock Turtles
Peak: number 167
Peak date: 29 April 1991
Weeks on chart: 1 week
English band The Mock Turtles formed in Middleton in 1985.  While not their first single in their homeland, "Can You Dig It?" was the band's debut Australian release, lifted from their first studio album Turtle Soup.
Internationally, "Can You Dig It?" peaked at number 18 in the UK in April 1991, and at number 12 in Ireland during the same month.
In Australia, "Can You Dig It?" was most popular in Victoria/Tasmania, where it reached number 151.  This single was the band's only release to chart in Australia, although two further singles were issued: "And Then She Smiles" (released locally in July 1991) and "Strings and Flowers" (November 1991).
In 2002, Vodafone used "Can You Dig It?" in a TV commercial in the UK.  This led to Norman Cook (of Fatboy Slim, Beats International and The Housemartins fame) remixing the track - though rather subtly, as I could barely distinguish the difference at first (it is mainly the percussion).  The remixed version charted in the UK, reaching number 19 in March 2003.
I can't say with certainty, because I cannot find any reference to it online, but I suspect that the guitar riff from this track is sampled (at a different pitch) on a track from another artist we will see in 1992.
Number 170 "Town without Pity" by Stray Cats
Peak: number 170
Peak date: 29 April 1991
Weeks on chart: 1 week
Stray Cats last graced our presence in February 1991.  "Town without Pity" was the third and final single lifted from the band's sixth studio album Let's Go Faster (number 57, March 1991).  As with the previous single, "Town without Pity" was another Australian-only release.  The song is a cover version of a song originally recorded by Gene Pitney in 1961 for the film Town without Pity.
On the ARIA state charts, "Town without Pity" performed strongest in Queensland, where it reached number 141.
We shall next see Stray Cats in 1992.
Number 186 "Easy Come Easy Go" by Winger
Peak: number 186
Peak date: 29 April 1991
Weeks on chart: 1 week
We last saw American metal band Winger in January 1991.
"Easy Come Easy Go" was the third and final single - and second to chart in Australia - from Winger's second studio album In the Heart of the Young (number 135, September 1991).  The single peaked at number 41 on the US Billboard Hot 100 singles chart in March 1991.
Locally, "Easy Come Easy Go" was most popular in New South Wales/Australian Capital Territory, where it reached number 168.
When it comes to metal, I generally prefer the softer, 'power ballad' side as with Winger's previous single.  I hadn't heard this one before, and while it's not something I would seek out, I find it OK.
"Easy Come Easy Go" was Winger's final single to chart in Australia.  They had another charting album, however, with their next album Pull peaking at number 164 in August 1993.
Number 187 "Remember the Day" by Innocence
Peak: number 187
Peak date: 29 April 1991
Weeks on chart: 2 weeks
We last saw Innocence in February 1991, and here they are with the fifth and final single - and fourth to register a place on the ARIA chart outside the top 100 - from their debut album Belief (number 115, February 1991).
"Remember the Day" peaked at number 56 in the band's native UK in March 1991.
Within Australia, "Remember the Day" performed strongest in New South Wales/Australian Capital Territory, where it reached number 169.
We will next see Innocence in 1992.
Next week (6 May): Four new top 150 debuts, although one of these is a song from 1986, and three bubbling WAY down under entries.
< Previous week: 22 April 1991                                      Next week: 6 May 1991 >
Posted by Bubbling Down Under at 00:00