What a mixed bag this week's new entries are.  Among them we have: two Stock Aitken Waterman-related tracks, a 1986 single re-charting, a remix of a 1975 track, some actors from Neighbours become backing singers, Barry Manilow (!), and a KLF side project of sorts!  Let's recap: 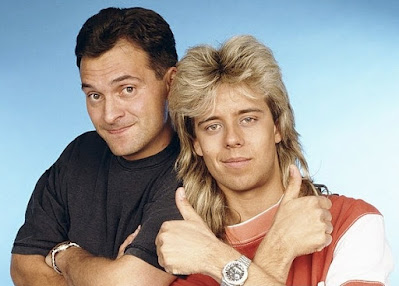 This 1986 Andrew Lloyd-Webber production originally peaked at number 24 in Australia in March 1987.  Despite an impressive chart run of 37 weeks in the top 100, only 6 of those weeks were in the top 40.  I guess The Phantom of the Opera, from which this track is lifted, must have been on tour in Australia around this time in 1989, leading to the single re-charting.
Cliff will bubble under next in January 1989, while Sarah will next join us in 1993.

I have previously written about this track in my special post on singles peaking at number 101.  The original version of this track peaked at number 3 in Australia in November 1975.  This version was remixed by Pete Hammond, from the PWL (Pete Waterman of Stock Aitken Waterman's label) stable.  The remixed version didn't fare much better in the UK, where it peaked at number 92 in April 1989.

I'm pretty sure I was not aware of this song at the time.  It sounds like just the sort of thing radio would have lapped up in 1989, slotting nicely into that Deacon Blue, Prefab Sprout, Hue and Cry, Love and Money kind of sophistipop genre.  Despite that, and Andy hailing from England, it missed the UK top 100 chart, and only managed to scrape into the top 150 locally.  It's quite a nice track, I think, and deserved to do much better.

Here's another one I have already written about, in my special post on singles peaking at number 101.  Jane (Annie Jones) and Gail (Fiona Corke) from Neighbours join a band!  ...and don't seem to do much in it, really.  But this still makes for a fun song, with a colourful video to boot.  It seemed at this point that half of the Neighbours cast was releasing records, and we would even be 'treated' to offerings from Stefan Dennis and... er, Madge & Harold later in the year.  It's a shame we never got a single from Nell Mangel.

Speaking of Stock Aitken Waterman, here they are again with two UK radio personalities, Pat Sharp (the one with the mullet) and Mick Brown, covering the Gonzalez song, which peaked at number 30 in Australia in July 1979.
During the late 80s and early 90s, Pat & Mick would record and release a SAW-produced track what seemed like once a year, all in the name of charity.  My favourite release of theirs is "Let's All Chant", which peaked at number 11 in the UK in May 1988.
As far as I am aware, "I Haven't Stopped Dancing Yet" is the only Pat & Mick single released in Australia.  Interestingly, the mulleted one looks uncannily like a younger version of my maths teacher from high school, Mr. Robinson, who taught me in years 8, 10, and 12; though he also wore (seriously) Coke bottle glasses.

With yet another Stock Aitken Waterman-connection among this week's new entries, June Montana, one half of Disco 2000, was the lead vocalist in the SAW-produced Brilliant, who released several decent but flop singles in 1985 and 1986.  The other half of the duo, Cressida Bowyer, was none other than the (now ex-)wife of Jimmy Cauty - who was one half of The KLF and also in Brilliant with June.  Phew!  With that pedigree, you would expect this track - a cover version of a Motown Stevie Wonder track from 1965 - would be a hit; but it wasn't to be.  Since I won't otherwise get the opportunity to talk about it here, I thought I'd mention that June also had a very decent track, "I Need Your Love", out around the same time, which is well worth checking out.

Despite her 1987 duet with The Pogues belatedly becoming a Christmas 'hit' of sorts, and even denting the lower end of our top 50 in 2019, this was Kirsty's first chart 'hit' in Australia.  Despite having sporadic decent-sized hit singles in the UK throughout the 80s in her native UK, none of Kirsty's singles really crossed over here.  Her biggest solo success would come in 1991 with "Walking Down Madison" (number 58, September 1991).
"Free World" was the lead single from Kirsty's Kite album (number 110, July 1989).  Two more singles from the album were issued in Australia: "Days" (released locally in July 1989) and "Innocence" (released September 1989), neither of which charted.
Kirsty tragically died in December 2000, aged 41, after being hit by a speedboat while surfacing from a dive in Mexico.  Kirsty will bubble under again several times in the coming years, with the next occasion being in 1992.

Number 167 "Please Don't Be Scared" by Barry Manilow
Peak: number 156
Peak date: 19 June 1989
Weeks on chart: 3 weeks
Who would have guessed that Barry Manilow had a 'hit' on the Australian chart as late as 1989?  Not me.  That being said, Barry placed 15 singles on the Australian top 100 between 1975 and 1986, with the biggest of those being "Can't Smile without You" (number 3, June 1978).
"Please Don't Be Scared" was lifted from Barry's thirteenth studio album Barry Manilow, which did not chart in Australia.
Internationally, "Please Don't Be Scared" peaked at number 35 in the UK in April 1989.
Domestically, the single performed strongest in Western Australia, where it reached number 113.
Barry placed one further single on the Australian chart, "Copacabana (At the Copa)" (The 1993 Remix), which peaked at number 92 in May 1994.

Boy George's solo career started out with a number 5-peaking single in 1987, but no subsequent single to date had peaked higher than number 77.  This very 'American'-sounding number didn't turn his fortunes around.  In fact, he would only score one other Australian top 40 hit during his career, in 1993 with "The Crying Game" (number 39, May 1989).
George had previously bubbled under on the Australian Music Report's singles receiving significant sales reports beyond the top 100 list in April 1988, when "Live My Life" reached fifteenth place on the list.
Another Boy George single, "No Clause 28", registered within the top 100 on three of the state charts, but did not chart nationally - this was before the ARIA singles chart extended beyond number 100.  "No Clause 28", a protest song about Margaret Thatcher's conservative UK government's legislation prohibiting the "promotion of homosexuality", peaked highest in Victoria/Tasmania, where it reached number 78.
Confusingly, Boy George released three albums, with similar but not identical tracklistings, in the space of a year, around this time.  Two of them, Tense Nervous Headache (number 145, February 1989) and High Hat (number 126, June 1989) were released in Australia, with "Don't Take My Mind on a Trip" being the lead single from the latter.  "No Clause 28", however, did not appear on either album, and was instead on the Boyfriend album, which was issued in some European countries (but not the UK) and Asia.
We shall see Boy George bubble under next in October 1989 with one of his other projects.  George will next bubble under solo in 1994.

Next week (5 June): Five new entries plus another bubbling WAY down under.  Among them is a 1960s singer who scored a hit a couple of years ago after an unlikely pairing with a current pop group.  You can follow all of my posts on facebook, too.