Hey, it's the 90s!  Those of you who lived through the 90s may remember that expression being bandied about, as evidenced by this video.  And so this week, we enter the 1990s decade on the ARIA chart.
But before I start writing about that, I feel compelled to ask... where were you when the 90s clocked over?  I was 11 years old and about to start my final year of primary school, which in my state is grade 6.
The 90s are often - lazily, and somewhat inaccurately, in my view - summed up as being the decade where 'alternative' music became mainstream, and grunge music ruled.  While there's a kernel of truth there, the 90s was in no way just about that - dance music and rap also increased in popularity throughout the decade, and there were also plenty of schmaltzy, over-produced ballads that performed well on the charts.
But this blog isn't exactly focused on what was popular back then, right?  No, instead I'll be writing about the songs that didn't do so well on the chart - the songs you might have completely forgotten about, or simply weren't even aware of in the first place.
ARIA commenced producing The ARIA Report, a weekly chart publication only available via subscription (what the 'for detailed weekly chart information... send $100...' blurb on the printed top 50 charts - as embedded below - alluded to) in January 1990.  Although, this blurb was not printed on the top 50 charts until the end of April 1990:

If I'd had a clue that the 'detailed chart information' was the full top 100 charts, I would have cobbled enough pocket money together to subscribe in a jiffy!  Only, I remained clueless until late 1997, when I got the interwebz at home and quickly discovered Sarch's email list (were any readers out there also on that?), which sent out the top 100 singles chart every week (for free), until he stopped in early 1999.
In 1990, there were 272 singles that peaked between numbers 101 and 150 on the Australian singles chart.  Interestingly (well, if you're a stats nerd like me), none of these singles peaked at number 135, and only one peaked at number 113.  Let's take a look at the first instalment of them. 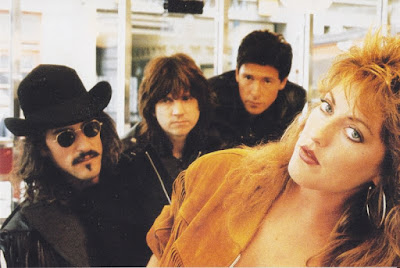 Katrina and The Waves: After 'Sunshine', Katrina and her pals didn't exactly make 'waves' on the Australian charts.
Top 150 debuts:
Number 123 "Harvest Moon" by James Reyne
Peak: number 122
Peak date: 15 January 1990 and 5 February 1990
Weeks in top 150: 6 weeks
"Harvest Moon" was James' tenth solo single, the fourth and final release from his Hard Reyne album (number 7, May 1989), and the first to miss the top 100.  If a music video exists for this track, it has not been uploaded to YouTube, and also does not appear on the withdrawn-soon-after-its-release-and-subsequently-sells-for-silly-prices The Definitive Collection DVD shared with James' former band, Australian Crawl.  I have no recollection of hearing this song before, so it can't have been promoted too well.
James will next visit us in 1995.
Number 140 "Washaway" by The Shivers
Peak: number 104
Peak date: 5 February 1990
Weeks in top 150: 9 weeks
This is another track I have no recollection of - a common theme among this week's new entries.  While I can't muster many facts about this group, what I can tell you is that The Shivers were an Australian band, and their lead singer, Wendy Morrison, sang the theme song for the Australian TV series Sea Change in 1998 with Richard Pleasance, formerly of Boom Crash Opera.  I can also tell you that this single was released in early November 1989, and that the album it is lifted from, Big Love, missed the top 150.  "Washaway" performed better on the Australian Music Report singles chart, where it peaked at number 81.
The Shivers will visit us again in July.
Number 141 "You're the Reason" by Gene Pitney
Peak: number 103
Peak date: 5 February 1990
Weeks in top 150: 8 weeks
Another recurring theme this week seems to be songs that don't have music videos - at least, not on YouTube, anyway.  I also didn't think I knew this one, but the melody seems vaguely familiar... and, to my surprise, I don't mind it!
Gene Pitney was 49 at this point in time, but seemed so old to me (for a pop star, anyway), when his duet with Marc Almond, "Something's Gotten Hold of My Heart" (number 24, April 1989) was on the chart.  That song had been Gene's first charting single in Australia since 1975.  Gene's biggest hits in Australia both peaked at number three - 1962's "(The Man Who Shot) Liberty Valance", and 1963's "Twenty Four Hours from Tulsa".
Gene gave a rather infamous TV performance of "You're the Reason" on UK TV in 1989, where he missed his cue, miming the song outdoors on a boat, and is wildly out of sync for the entirety of the song.
"You're the Reason" was lifted from the album You're the Reason (number 133, March 1990), and performed better on the Australian Music Report singles chart, where it peaked at number 81.
Had I been more clued-in to The ARIA Report, which I mentioned in the long intro blurb to this week's post, I would have noticed "You're the Reason" listed on the state chart summary, with a national HP (=High Point, aka highest position) of 119 on the ARIA Report dated week ending 28 January 1990: 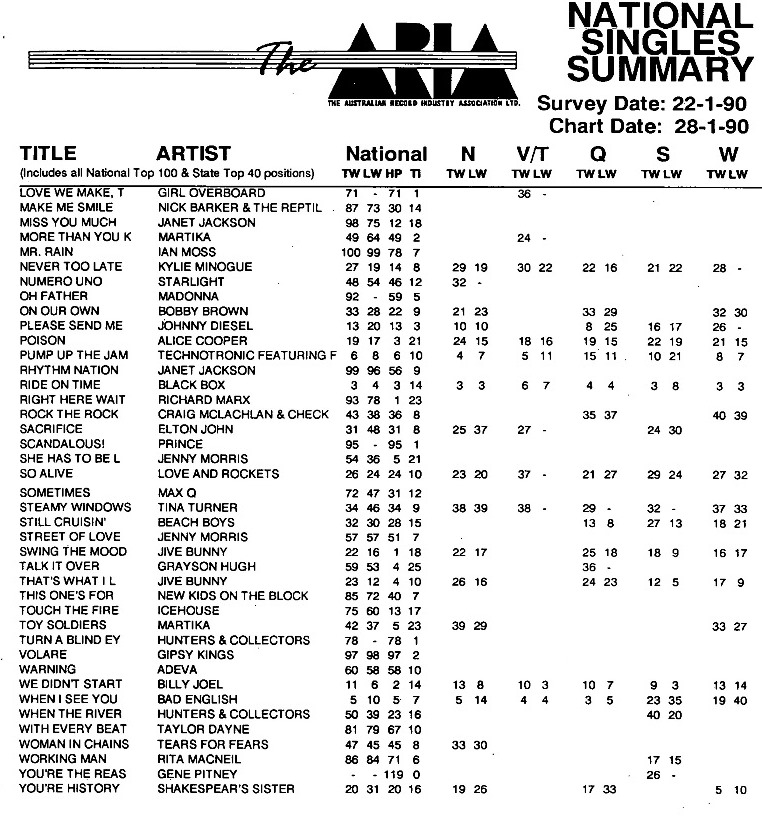 These lists only seldom contained singles that were not within the national top 100, and such singles almost never had national HP's outside the top 100 listed.  Had I seen this in 1990, it would have alerted me to there being ARIA chart positions beyond number 100 - about 24 years earlier than I discovered this fact!  As you can see in the table above, "You're the Reason" did much better on the South Australia/Northern Territory state chart, where it peaked at number 21, than anywhere else.
Gene passed away in 2006, aged 66.
Number 146 "Rock 'n' Roll Girl" by Katrina and The Waves
Peak: number 146
Peak date: 8 January 1990
Weeks in top 150: 2 weeks
Finally we have a song with a music video on YouTube!
If you were not following the charts like a hawk in the 1980s, odds are, like me, you would have thought Katrina and The Waves had one song, "Walking on Sunshine" (number 4, June 1985), and that was it.  But they actually had a second top 40 hit in Australia, with "Do You Want Crying" (number 38, September 1985).
"Rock 'n' Roll Girl" was the second single lifted from the band's Break of Hearts album (number 127, January 1990), following "That's the Way" (number 58, November 1989).  "Rock 'n' Roll Girl" also charted in the UK, where it peaked at number 93 in November 1989.
Bubbling WAY down under:
Number 157 "Baby Come to Me" by Regina Belle
Peak: number 157
Peak date: 8 January 1990
Weeks on chart: 2 weeks
American singer Regina Belle landed a major hit in Australia with her duet with Peabo Bryson, and theme song to Disney's 1992 movie Aladdin, "A Whole New World (Aladdin's Theme)", which reached number 10 in June 1993.  Unfortunately for Regina, none of her other releases - album or single - made the top 150 in Australia.
"Baby Come to Me" had greater, albeit modest, success in Regina's native US, where it peaked at number 60 in November 1989.
On the ARIA state charts, "Baby Come to Me" performed strongest in Western Australia, where it peaked at number 127.
Regina will join us again in 1993.