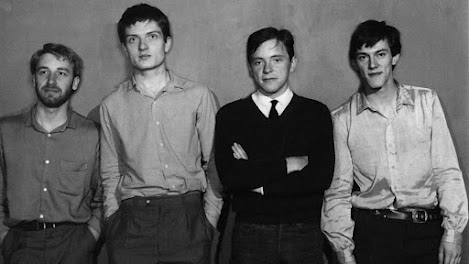 Joy Division: big legacy, but not many big chart hits.
Beyond the top 100:
Position 11 "Transmission" by Joy Division
Highest rank: 2nd
Peak date: 24 August 1981
Weeks on below list: 5 weeks
Despite being one of the most influential bands from the 1970s, Joy Division only ever landed one moderate hit on the Australian singles chart, with "Love Will Tear Us Apart" (number 26, April 1981).  That song became a hit locally almost a year after lead singer Ian Curtis' suicide, at age 23, on 18 May 1980.  "Love Will Tear Us Apart" would be the English band's only single to enter the Australian top 100.
Joy Division had greater, but still modest, success on the Australian albums chart, with five top 100 albums between 1981 and 2008.  Both "Love Will Tear Us Apart" and "Transmission" were non-album singles.
"Transmission" was released in the UK in October 1979, but failed to chart in the band's homeland.  The single was belatedly issued in Australia in early July 1981, and narrowly missed the top 100.
In contrast to Joy Division's chart performance in Australia, the band were quite popular in New Zealand, where both "Love Will Tear Us Apart" and "Atmosphere" reached number 1 in 1981.  "Transmission" peaked at number 2 in New Zealand in September 1981.
While I have embedded the studio version of "Transmission" below, no music video exists for it.  A live performance of "Transmission" on Something Else, from 15 September 1979, is used in lieu of a music video.  I have seen this performance on the Australian music video program rage numerous times - initially, it scared me a little, due to the intensity of Ian's vocal performance and his dancing.  Dance, dance, dance, dance, dance to the radio, indeed!
"Transmission" was released again in Australia in November 1984, but it neither charted nor bubbled under then.
Following Ian's death, Joy Division went on to become New Order, whom we saw in 1991.
We shall see Joy Division again in 1995.
Position 37 "Twist and Shout" by David Lindley
Highest rank: 28th
Peak date: 24 August 1981
Weeks on below list: 3 weeks
You know from the title that this track is going to be a cover version of the Top Notes song that The Beatles famously covered.  We've already seen another version of "Twist and Shout" charting in 1989.
David Lindley is an American musician.  "Twist and Shout" was lifted from his debut solo album El Rayo-X, which peaked at number 83 in the US in July 1981.
David never landed a top 100 album or single in Australia, and I cannot find evidence of this single charting anywhere else.
Next week (10 August): Three new singles bubbling under the top 100.
< Previous week: 27 July 1981                             Next week: 10 August 1981 >
Posted by Bubbling Down Under at 00:00