This week in 1981, there was only one new single bubbling under the top 100 that did not eventually break through into the top 100.  Let's take a look at it. 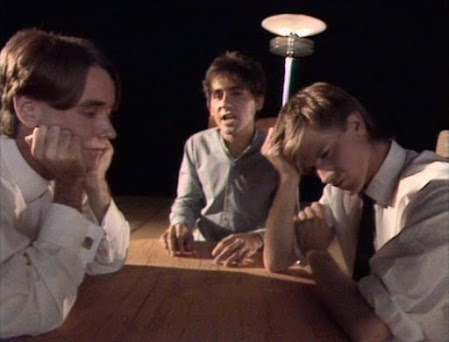 Serious Young Insects did not 'bug' the top 100 with this track.
Beyond the top 100:
Position 13 "Trouble Understanding Words" by Serious Young Insects
Highest rank: 1st
Peak date: 7 September 1981
Weeks on below list: 6 weeks
Melbourne band Serious Young Insects formed in 1980.  The group consisted of Peter Farnan - who went on to form Boom Crash Opera - on vocals and guitar, Michael Vallance on vocals and bass guitar, and Mark White on vocals and drums.
The trio released three singles and an album Housebreaking.  Only one of the band's releases, the single "Be Patient" (number 63, July 1982), entered the Australian top 100.
Another future member of Boom Crash Opera, Richard Pleasance, joined the group briefly before it dissolved in 1983.