Two of the three new entries bubbling under the Australian top 100 this week in 1981 were form solo artist collaborating with others, while the other song is from an artist who had previously been in bands going solo.  Let's take a look. 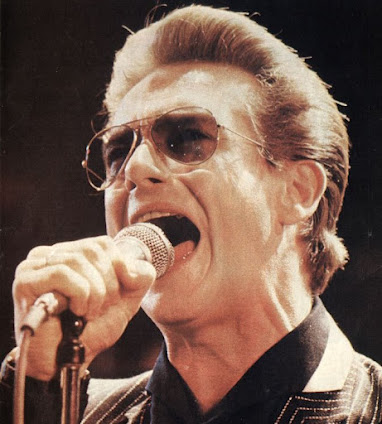 Graham Bonnet: it was all over, baby blue for his Australian chart career with this release.
Beyond the top 100:
Position 31 "Night Games" by Graham Bonnet
Highest rank: 31st
Peak date: 10 August 1981
Weeks on below list: 1 week
Before launching a solo career in 1972, English rock singer Graham Bonnet was a member of The Marbles.  He was also later in the bands Rainbow and the Michael Schenker Group.
Interestingly, Graham had more commercial success in this region of the globe with his solo releases than in his homeland.  Graham's version of Bob Dylan's "It's All Over Now, Baby Blue" peaked at number 3 in both Australia and New Zealand, in November 1977 and February 1978, respectively.  Graham went one better with "Warm Ride", which peaked at number 2 in Australia in August 1978.  Surprisingly, neither of these singles charted in the UK.  Graham only scored one other top 100 single in Australia, with "Danny" (number 79, February 1978).
Graham also landed two top 10 albums in Australia, with Graham Bonnet (number 7, November 1977) and No Bad Habits (number 6, September 1978).  In contrast, neither of these albums charted in the UK, and Graham's highest-peaking solo album there only reached number 62.
"Night Games" was the lead single from Graham's third album Line-Up, which did not chart in Australia.  Internationally, "Night Games" peaked at number 3 in Ireland, and number 6 in the UK in April 1981, where it was his first solo hit, and only solo single to trouble the top 50.
While none of his later releases charted in Australia, Graham continued to record music, with the Graham Bonnet Band's Day Out in Nowhere album being released earlier this year.
Position 37 "The Race Is On" by Dave Edmunds with The Stray Cats
Highest rank: 29th
Peak date: 24 August 1981
Weeks on below list: 2 weeks
Welsh musician Dave Edmunds is someone I am familiar with through catching the music video for his hit "Girls Talk" (number 9, November 1979) on rage during retro month in the late 2000s.  When I saw that Dave had teamed up with Stray Cats (who don't actually have a 'The' at the start of their name, but do on the artwork for this release), I was surprised, as their music styles don't seem that similar to me.  Stray Cats have made a couple of appearances to date on my late 80s/early 90s ARIA top 150 chart recaps, starting in 1989.
Overseas, "The Race Is On" peaked at number 34 in the UK in June 1981, and number 17 in Ireland.  The track is a cover version of a song originally recorded by George Jones in 1964.
"The Race Is On" would be Dave's final single to (almost) chart in Australia.
Position 40 "G'day, Blue" by Slim Dusty and The Travelling Country Band
Highest rank: 12th
Peak date: 28 September 1981
Weeks on below list: 9 weeks
Australian country legend Slim Dusty, born David Gordon Kirkpatrick, spent two weeks at number one on the Australian singles chart with "Duncan" in February 1981.  It is a bit surprising, then, to see Slim languishing outside the top 100 a mere 7 months later; although hit singles were never Slim's strength, with only one of his other releases, "G'day G'day" (number 37, September 1988), denting the top 40 during the 1970s and 1980s.
"G'day, Blue" was the opening track on Slim's Where Country Is (number 59, September 1981) album.
Slim passed away in 2003 from kidney cancer, aged 76.
Slim will join us again in 1986.
Next post (24 August): There are no new entries peaking below the top 100 next week, but in a fortnight's time, there are seven new entries bubbling under the top 100.
< Previous week: 3 August 1981                                         Next post: 24 August 1981 >
Posted by Bubbling Down Under at 00:04