This post is the first in a series of occasional 'special' posts, that differ in content from my weekly recaps of top 150 debuts. 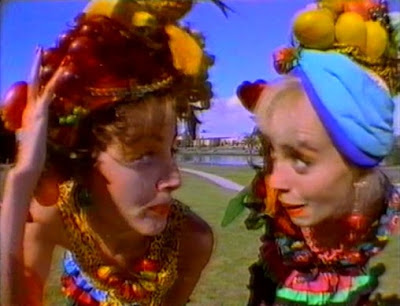 Remember that time that Gail and Jane from Neighbours tried to become pop stars?  Thought not.

The most interesting thing about this release is that it features Jane (Annie Jones) and Gail (Fiona Corke) from Neighbours, who also appear in the video, as backing vocalists!  I remember this track being reviewed in either Smash Hits or rival Hit Songwords, with the comment that it was probably the first time an act's backing singers were more-famous than the front person of a group.  Still, 'Hey Ciao' performed better on the charts here than fellow Neighbour Stefan Dennis's attempt at becoming a pop star - though I'm not certain that got a local release, as it does not appear in the Australian Music Reports new releases lists, despite rage playing the video.

I guess we must have had an Australian band called Jigsaw for the UK act to be re-branded 'Jigsaw UK' down under.  Before Newton's Stock/Aitken-produced cover version of the 1975 Jigsaw track in 1994, Pete Hammond (also associated with Stock Aitken Waterman) had a go at remixing the original for a 1989 release.  This sounds remarkably similar to the Newton version, to my ears - at least vocally.  Curiously, this version took eight weeks to reach its peak of number 101, before falling off the chart the following week.

This 'one' interestingly debuted at its peak of number 101 and could not manage to climb 'one' place higher to reach the top 100.  The Australian top 100 singles chart remained a hit-free zone for the Bee Gees for nearly a decade, between when 'You Win Again' left the top 100 in February 1988 and 'Alone' gave them another hit in June 1997.  A case of the tall poppy?

Gotta love that title, eh?  The follow-up to 'Let's Put the X in Sex', '(You Make Me) Rock Hard' was also lifted from their Smashes, Thrashes & Hits greatest hits album.  Except that this one didn't become a hit - or even chart - anywhere else, from what I can gather.

Kiss seemed to be well into their glam metal phase, with several if not all of the band members (dare I say it) not looking that unlike Cher in the late 80s in the music video.

Jerry re-recorded his 1957 hit for the soundtrack of the 1989 movie of the same name.  Surprisingly, this had no connection to Jive Bunny and The Mastermixers, who sampled this song on one of their two 1989 hits.

Texas had a hard time following up their top 10 single from 1989 with anything substantial.  Until 1997, their next-biggest hit on the Australian singles chart could reach no higher than number 52.  They'd have to settle for number 101 with this, the fourth and final single from their Southside album.

Iggy actually wears a shirt and jacket in the video for this one, unusually.  Iggy would score a hit later in 1990 with his duet with Kate Pearson, but for now, he'd have to settle for livin' on the edge of the top 100.

The original peaked at number 72 in 1989, but this remixed version fared even worse on the Australian chart.  Bobby would peak 100 places higher though with his next release.

Speaking of Bobby Brown, Glenn seemed to have undergone a 'Bobby Brown' makeover in 1990, with the aforementioned star featuring on his second and final hit.  It didn't seem terribly convincing.  Neither did this.

"From a Distance" by Cliff Richard
Peak date: 7 January 1991

Debuting on the chart a mere six weeks after the Bette Midler version of the same song, Cliff's version landed just a small distance from the top 100.  Now Cliff is the sort of artist who seems more likely to sing lyrics like "God is watching us" than Bette...

'Auberge' is a French word for inn, and Chris Rea couldn't quite make it in to the top 100 with this one.  In fact, Chris wouldn't make it into the top 100 singles chart in Oz again.

I remember hearing Ned's Atomic Dustbin being mentioned on the ABC's The Afternoon Show, but don't recall hearing any of their music before.

Everyone's got to start somewhere, and for Keith, that was at number 101, with his second single release - a whole 11 and a half years before scoring his first top 100 entry on the Australian singles chart.

Normal service will resume with my recap of new top 150 entries on 6 February.

Posted by Nathan @ Bubbling Down Under at 22:04