Back in February 2020, I made a 'special' post on singles that peaked at number 101 on the ARIA chart between 1989 and 1991.  The current month (August 1990) I am recapping on my weekly chart posts has notably fewer songs to write about than usual, so I thought it was an opportune time to write a sequel to my first post looking at singles that narrowly missed the Australian top 100.
This time, we'll take a look at songs that peaked at number 101 between January 1992 and December 1994.  If you don't want some 'spoilers' on my posts over the next 4 years, look away now!  Unlike my regular posts, I will not be posting the entry position or weeks spent in the top 150 for the releases below - you'll have to wait until between 2023 and 2025, when I get to those years in my weekly posts (assuming society hasn't collapsed before then), for that info. 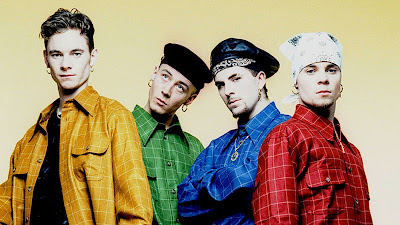 "Heartbreaker" by Color Me Badd
Peak dates: 30 March 1992 and 6 April 1992
American vocal quartet Color Me Badd started their chart career off in Australia with back-to-back top 10 hits "I Wanna Sex You Up" (number 4, August 1991) and "All 4 Love" (number 9, November 1991).  After that, it was all downhill, with the group only scoring one other top 50 single, "I Adore Mi Amor" (number 27, February 1992).  "Heartbreaker", the fourth single lifted from the group's debut album C.M.B. (number 17, February 1992) was Color Me Badd's first single to miss the ARIA top 100.  It would not be their last...
"Stop Draggin' Around" by Lenny Kravitz
Peak date: 18 May 1992
Lenny Kravitz's singles chart trajectory in Australia was off to a patchy start for the first few years, with only one ("It Ain't Over 'Til It's Over" - number 10, August 1991) of the seven singles released locally from his first two albums peaking higher than number 36.  This wasn't one of them.  "Stop Draggin' Around", however, does not appear to have charted anywhere else... so number 101 is not too bad a placing for it, then, right?
"Ballroom Blitz" by Tia Carrere
Peak date: 10 August 1992
I was born five years after The Sweet's "Ballroom Blitz" was released, but it was a song I somehow 'knew' growing up.  I think I first heard it while changing radio stations on my ghetto blaster, on one of the 'oldies' stations, and was intrigued by the song/found it amusing.  Naturally, such a song was a good fit for a comedy movie, and Tia Carrere recorded this cover of it for Wayne's World.  Despite never having seen the movie myself (yes, really - I'm not into movies at all), I am familiar with some of Wayne and Garth's lingo, which made its way into the vernacular.  Tia's version of this song, however, did not.
"Broken English" by Sunscreem
Peak date: 3 May 1993
English band Sunscreem sadly only scored one hit, and a moderate one at that, in Australia, when the brilliant "Love U More" made its way to number 30 in March 1993, a mere six months after its release.  Aside from that track, only one other single of theirs dented the ARIA top 100: "Pressure Us" (number 64, July 1993).  "Broken English" was one of a string of excellent singles from Sunscreem that went unnoticed in this country.  As if to add insult to injury, "Broken English" spent five consecutive weeks hovering between number 101 and 107 on the ARIA chart, unable to penetrate the top 100.
"How I'm Comin'" by LL Cool J
Peak date: 17 May 1993
Big rap hits in Australia were few and far between until 1990.  It took LL Cool J four years to break into the ARIA top 100, since his first single released locally, in 1987 ("I'm Bad").  "How I'm Comin'" just missed out.
"Only" by Anthrax
Peak date: 21 June 1993
I'm really not a fan of Anthrax's brand of metal, but this one seems on the (for them) softer side.  Despite that, the song did not cross over to the masses in Australia; though I suspect Anthrax are the kind of act where fans would probably buy the album instead.

"Everybody Dance" by Evolution
Peak date: 20 September 1993
"Everybody Dance" is cover version of a song originally released by Chic in 1978.  Despite becoming a top 10 hit for the group in the UK and a top 40 hit in the US, the Chic version failed to chart in Australia.  I got to know the Chic song, belatedly, in 2008, when a school I worked in at the time played a version of the song over the PA system at the end of recess and lunch times (so that the students would finish playing and get ready to return to their classrooms) for two minutes before the bell.  From speaking with people from other states in Australia, this phenomenon may be a Victorian-only thing.
But onto the Evolution version, the British dance group, signed to trendy dance label DeContstruction, did not score a top 100 entry on the ARIA chart, so this was as good as it got for them.  "Everybody Dance" was also their biggest hit in the UK, reaching number 19 in July 1993.
"Apache" by General Base
Peak date: 15 November 1993
From one dance act who had no top 100 entries in Australia to another... General Base also fall within that category.  German DJ Thomas Kukula was behind the act.  Oddly, this song does not appear to have charted anywhere else, not even in Germany!
"Gold" by East 17
Peak dates: 13 December 1993, 20 December 1993 and 27 December 1993
1993 was certainly a bumper year for singles peaking at number 101, with no fewer than 6 of them.  So it is fitting, then, that the one with the most weeks at number 101 in this post should also be from 1993.  Those three weeks East 17's "Gold" spent at number 101, though, occurred due to the ARIA chart taking a two-week break over Christmas in 1993, resulting in the final chart of the year being used for the following two weeks as well.  This practice of repeating the last chart of the year over the Christmas break happened until 1997, although in 1994 it was only for one week.
East 17's early chart trajectory in Australia was interesting, with the singles from their debut album Walthamstow (number 5, April 1994) peaking (in release order) at numbers 5, 7, 4, 101, and 1!  "Gold", defying the song's title, was the only one of the lot to miss the top 10.   Why, I am not sure.  Perhaps it sounded a little too similar to "House of Love" (number 5, April 1993)?
"Can You Feel It" by Obsession
Peak date: 21 March 1994
Dance remix outfit Almighty are behind Obsession, with the help of several female studio singers.  This track, a cover of The Jacksons, does not appear to have charted anywhere else, oddly.
"Slave New World" by Sepultura
Peak date: 25 July 1994
More metal on the heavier side, Sepultura isn't the kind of thing I enjoy listening to.  The only song of theirs I vaguely remember is "Roots Bloody Roots" (number 44, February 1996), which, coincidentally, was their only single to break the top 100 in Australia.  "Slave New World" just missed out.
< Singles that peaked at number 101 in Australia 1989-1991
Posted by Bubbling Down Under at 12:19