This week forty years ago, there was only one single bubbling under the Australian top 100 chart.  Let's take a look at it. 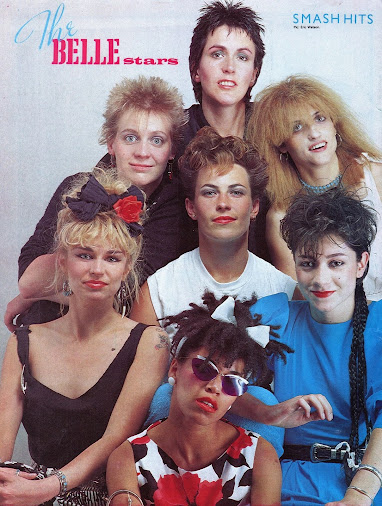 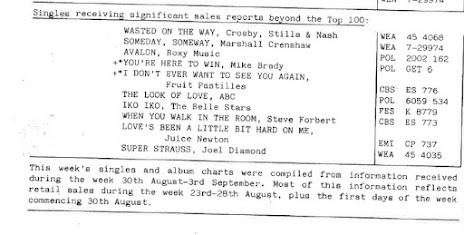 Position 7 "Iko Iko" by The Belle Stars
Highest rank: 5th
Peak date: 20 September 1982
Weeks on below list: 2 weeks
This single peaked at number 7 in Australia in June 1989 when re-released, spending 25 weeks on the chart.
British all-female band The Belle Stars formed from the remnants of The Bodysnatchers in 1980.  The seven-piece band were signed to Stiff Records, who had Madness, Kirsty MacColl and Elvis Costello on their roster, among others.  The band's debut single "Hiawatha" was released in 1981, but The Belle Stars did not receive their first taste of chart success until their version of James "Sugar Boy" Crawford and His Cane Cutters' "Jock-A-Mo" from 1953, re-titled "Iko Iko", crept into the UK top 40 in June 1982, peaking at number 35 during the same month.  The 1982 release of "Iko Iko" also peaked at number 35 in New Zealand in August 1982.
The Belle Stars' real commercial breakthrough came, however, with their next single - another cover version - "The Clapping Song", which peaked at number 11 in the UK in August 1982.  "The Clapping Song" did even better in Australia, reaching number 4 in February 1983.
Another cover, "Mockingbird", followed, before the group finally landed a hit with an original composition, "Sign of the Times".  "Sign of the Times" became The Belle Stars' biggest hit in their homeland, peaking at number 3 in the UK in February 1983.  In Australia, "Sign of the Times" was only a minor hit, reaching number 45 in June 1983.
Seeming to always prefer the flops, my favourite Belle Stars tracks are two singles that did just that: "The Entertainer" (not released in Australia, but peaked at number 95 in the UK in November 1983)  and "World Domination" (released locally in September 1986, did not chart).  The group had been pared back to a trio by the time of "World Domination", which was their final release of new material.  The Belle Stars split soon afterwards.
During their tenure, The Belle Stars only released one album The Belle Stars (number 76, April 1983).  Although somewhat 'iconic', Stiff Records are now kind of known for... stiffing their artists, and it looks like that happened with The Belle Stars career.
"Iko Iko" found a second lease of life when it was used in the opening scene for the 1988 movie Rain Man, starring Tom Cruise and Dustin Hoffman.  The track appeared on the soundtrack for the movie, and was given a single release.  A music video was also filmed to promote the re-issue; something that had not happened for the 1982 release of the single.  However, only the band's lead singer Jennie Matthias appears in the 1989 video for "Iko Iko" (embedded below), alongside four female backing dancers.
Interestingly, the few TV performances of "Iko Iko" I could find on YouTube for the 1982 release were all actually live.  The one I've linked here is my favourite.
The 1989 release of "Iko Iko" was a smash hit in Australia, peaking at number 7 in June 1989.  On the state charts, "Iko Iko" was most popular in Western Australia, where it reached number 4.  Interestingly, the single peaked within the top 10 on all of the ARIA state charts, other than South Australia/Northern Territory, where it only reached number 32.  I wonder what happened there.
Internationally, "Iko Iko" peaked at number 14 on the US Billboard Hot 100 in May 1989, number 6 in Switzerland in May 1989, number 13 in Austria in June 1989, number 30 in Germany in June 1989, number 98 in the UK in June 1989, and number 5 in New Zealand in June 1989.
I may have mentioned before in my posts that, despite being a music video aficionado, I am really not a movie buff at all.  I hadn't seen Rain Man until quite recently, catching a repeat of it on TV.
While I like The Belle Stars' rendition of "Iko Iko", one thing that bugs me slightly about it is that they sing (at least, to my ears) "check-a-mo fee-na-nay", rather than "jock-a-mo", which is what all of the online lyrics have.  I cannot, for the life of me, hear "jock"!
Next post (11 October): Due to all of the bubbling under singles eventually making their way into the top 100 over the next four weeks, there will not be another 1982 post until 11 October, when there are two new entries.  See you then.
< Previous week: 30 August 1982                                           Next post: 11 October 1982 >
Posted by Bubbling Down Under at 13:05