An interesting - or so I thought - pattern emerging from this week in 1981's three new entries on the Kent Music Report beyond the top 100 list is that each one of the artists in question had more success with their releases in New Zealand.  Shall we take a look? 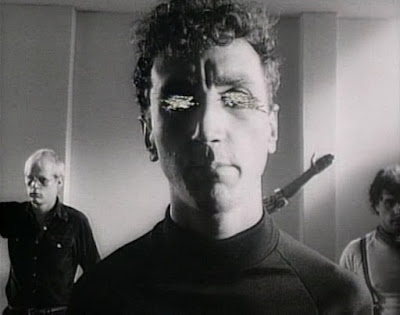 Pop Mechanix: Jumping out of windows, but not into the top 100.
Beyond the top 100:
Position 22 "Jumping out a Window" by Pop Mechanix
Highest rank: 13th
Peak date: 15 June 1981
Weeks on below list: 3 weeks
New Zealand band Pop Mechanix formed in 1979.  "Jumping out a Window" was the group's third single, and their last before they relocated to Australia.  It was also Pop Mechanix's (what an awkward word to make a possessive form from, with that spelling) only single to (sort of) register a place on the Australian chart.
The group had greater commercial success on the other side of the Tasman Sea, where five of their singles peaked in the top 50 between 1980 and 1986.  "Jumping Out a Window" reached number 21 on the New Zealand singles chart in March 1981, becoming their biggest hit there.
Oddly, the band do not seem to have released any albums during their heyday, although several compilations of their material have been released this century.  Pop Mechanix split in 1988.
I had heard/seen this song before on a re-run of iconic Australian music TV program Countdown during rage retro month, but had forgotten about it.  New Zealand really punched above their weight with musical talent from this era, with countless Kiwi acts Australia has tried to claim as our own.  I am surprised that this song did not become a hit locally, and that the band did not have greater international success.  If this had come out of the UK, I reckon we'd still be hearing about Pop Mechanix.
Position 27 "What Are We Doin' in Love" by Dottie West (with Kenny Rogers)
Highest rank: 12th
Peak dates: 29 June 1981, 6 July 1981, 13 July 1981, 20 July 1981 and 27 July 1981
Weeks on below list: 8 weeks
Dorothy West, known professionally as Dottie West, was an American country singer who began her recording career in the 1960s.  Dottie was the first female country singer to win a Grammy in 1965.  While Dottie landed a string of US Billboard Country Songs hits between 1963 and 1984, her duet with Kenny Rogers, "What Are We Doin' in Love", was the only one to reach the top 40 on the Hot 100, where it peaked at number 14 in June 1981.
Dottie's chart success in Australia was much more understated, and like Pop Mechanix above, this track was her only release to (sort of) register a place on the Australian charts.  Interestingly, Dottie achieved a top 40 hit in New Zealand with another Kenny Rogers duet, "All I Ever Need Is You", in 1979, which did not chart in Australia.
Dottie passed away in September 1991, aged 58, after being involved in a car accident as a passenger.  Dottie's car had broken down on the side of the road, and an elderly neighbour passing by offered her a lift.  Dottie was running late to a concert and urged the neighbour to speed.  The vehicle veered off the road after taking a turn at a too-high speed and collided with another car.  The driver survived, but Dottie died during her third operation following the collision, five days later.
I hadn't heard of this song before, but somehow guessed from the title that it would be a country song.  It is interesting that this single spent five consecutive weeks at its peak on the beyond number 100 list.
While we won't see Dottie again, Kenny will next join us in 1985.  We have also seen Kenny in 1989 and 1990.
Position 28 "Same Old Lang Syne" by Dan Fogelberg
Highest rank: 8th
Peak date: 6 July 1981
Weeks on below list: 6 weeks
I have written about American Dan Fogelberg's Australian chart history previously in this chart recap from 1990.
"Same Old Lang Syne" was lifted from Dan's seventh studio album The Innocent Age (number 38, June 1982).  The single peaked at number 9 on the US Billboard Hot 100 in February 1981; one of four Dan Fogelberg singles to reach the top 10 on this chart.  "Same Old Lang Syne" reached number 23 in New Zealand in May 1981, and number 25 in Ireland in December 1983.  I am not sure why this single charted more than two years later in Ireland, or why the Irish chart success did not spill over into the UK.
As mentioned above, we will see Dan again in 1990.
Next week (8 June): Next week, there is just one new entry on the bubbling under chart that did not reach the top 100.
< Previous post: 11 May 1981                                           Next week: 8 June 1981 >
Posted by Bubbling Down Under at 12:16