Four of this week's six new entries (including one bubbling WAY down under) are songs that did not register on any other 'real', sales-based chart, to my knowledge.  That's quite a feat, considering that only one of those four acts is Australian.  The other theme rippling through this week's entries is 'veteran' (as in, they'd been around for at least five years, which is a long time in chart years) acts giving it another go, or a new go as a solo act.  Let's take a look at what was bubbling down under this week in 1989: 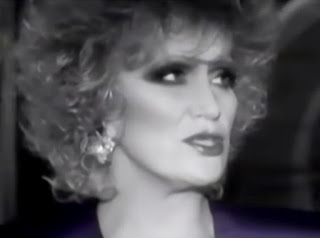 Dusty Springfield: Having no hits for almost two decades does not always "prove" your career is over.
Debuts:
Number 144 "Tears Run Rings" by Marc Almond
Peak: number 128
Peak date: 19 June 1989
Weeks in top 150: 5 weeks
Hot off the heels of his recent number 24 duet with Gene Pitney, "Tears Run Rings" became Marc's first truly solo chart 'hit' in Australia.  He had, of course, had a major hit in 1981-2 as one half of Soft Cell - and a newly-recorded version of that would give Marc a number 93 'hit' in 1991, though credited to Soft Cell/Marc Almond.  Marc also scored a number 34 hit with Bronski Beat in 1985, on a cover version medley of "I Feel Love", which has been dubbed "the gayest record ever made".  But this was as good as it got for Marc in his own right down under.  He had more success with this track in the UK, where it peaked at number 26 in September 1988.
"Tears Run Rings" was lifted from the album The Stars We Are (number 123, May 1989).  Another single from the album, "Only the Moment", was released in Australia in August 1989, but failed to chart.
We will next week Marc in 1991.


Number 145 "Nothing Has Been Proved" by Dusty Springfield
Peak: number 145
Peak date: 5 June 1989
Weeks in top 150: 1 week
Weeks on chart: 5 weeks
Dusty, real name Mary Isobel Catherine Bernadette O'Brien (phew!), had major chart success in the 1960s, including in Australia.  Her chart fortunes had all but dried up by the early 70s, though, and her last solo top 40 hit in Australia was 1970's "What Good Is I Love You?"  That all changed in 1987, however, when Pet Shop Boys rescued her from obscurity, with an unlikely pairing on the number 22 hit (number 2 in both the UK and US) "What Have I Done To Deserve This?"  Continuing the partnership, Pet Shop Boys produced half of Dusty's 1990 album Reputation, from which this track was eventually lifted.  While generally not a movie fan, to my ears, "Nothing Has Been Proved" sounds like it could have been a Bond theme; and my impression wasn't too far off the mark, as the song was recorded for and played over the closing credits of the 1989 British film Scandal, about a political scandal involving the Conservative Party in 1963.  The single had more success in the UK, where it peaked at number 16, and gave Dusty her first solo top 40 single since 1970.  We will see Dusty bubbling down under again in 1990.  Of course, Dusty sadly passed away from cancer in 1999, aged 59.

Number 148 "I'm On To You" by  Hurricane
Peak: number 148
Peak date: 5 June 1989
Weeks in top 150: 1 week
Perhaps one factor leading to heavy metal's decline in the early 1990s was that the market was fairly saturated with similar acts by this point.  Enter Hurricane into the fray, with their first Australian chart 'hit', with a song that failed to register on any other chart (real chart, I mean) as far as I can tell, including the Billboard Hot 100 in the group's homeland.  Parent album, Over the Edge, fared slightly better on the Billboard 200, reaching number 92.  It's not something I would normally listen to, but I have to admit that the "na na na na na na" hook is catchy.  Hurricane will visit us again in 1991.


Number 149 "No Matter What" by Swingshift
Peak: number 126
Peak dates: 26 June 1989 and 24 July 1989
Weeks in top 150: 11 weeks
Swingshift were an Australian band, and this single - their only release listed on discogs.com - appears to have been issued on a small independent record label, Top Shelf Recordings.  Only one other title, from another band, is currently listed on the Top Shelf Recordings record label page on the site.
Despite being issued on an independent label, "No Matter What" was promoted though a TV advertising campaign, as evident on the embedded video below.
Unfortunately, nobody has uploaded the music video for the song, or the full audio for the track, so the snippet in the ad below is all you can hear of the song.  I have no recollection of hearing "No Matter What" before.
Swingshift started out as a Cold Chisel covers band, and Dave Leslie from the group went on to later join the group Baby Animals.

Number 150 "Everything That Comes Around" by Mick Jones
Peak: number 150
Peak date: 5 June 1989
Weeks in top 150: 1 week
Mick is (not was!) the guitarist in Foreigner, and remains the band's only remaining founding member.  Oddly, this track didn't chart (at least, not within the top 100) in his native UK, or anywhere else, for that matter, as far as I am aware.  To date, this song's parent album, the imaginatively-titled Mick Jones, remains his only solo release.

Bubbling WAY down under:
Number 158 "Romance (Love Theme From Sing)" by Paul Carrack & Terri Nunn
Peak: number 158
Peak date: 5 June 1989
Weeks on chart: 1 week
Another track that didn't chart anywhere else on a 'real' chart (no, the Billboard Adult Contemporary chart does not count in this instance!) is this 'love theme' (doncha love how 80s that expression is?) duet between Paul Carrack and Terri Nunn.  Paul had been somewhat of a chameleon on the Australian charts, with his first taste of chart success coming as lead vocalist of Ace with 1975's "How Long" (number 63), a song that went on to be covered by many artists.  Paul then went on to have four of his own solo hits during the 1980s, with 1987's "When You Walk in the Room" reaching number seven.  More-recently, Paul had just scored a number one single in Australia singing lead on Mike + The Mechanics' "The Living Years".  Phew!  Terri Nunn was the lead singer in synth-pop band Berlin, who had scored four top 40 hits in Australia between 1984 and 1987, with Top Gun soundtrack hit "Take My Breath Away" easily being the biggest of those, peaking at number two.  We will see Paul bubble under again a couple of times over the next year, but this would be Terri's only solo Australian chart 'hit' as far as I am aware.


Next week (12 June): five debuts within the top 150, plus two bubbling WAY down under entries.  As always, you can also follow my posts on facebook.