This week 40 years ago on the Australian chart, there was just one single bubbling below the top 100 that never broke through onto the chart.  Let's take a look. 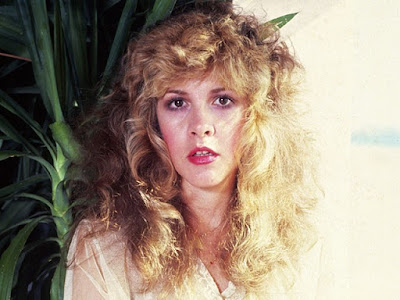 Stevie Nicks: literally seventeenth place on the edge of the Australian top 100.
Beyond the top 100:
Position 31 "Edge of Seventeen" by Stevie Nicks
Highest rank: 17th
Peak date: 23 November 1981
Weeks on below list: 4 weeks
Stephanie Nicks, nicknamed Stevie after pronouncing her name as "Tee-dee" as a toddler, got her first break when the group she fronted, Fritz, were the opening act for Jimi Hendrix and Janis Joplin during the late 60s and early 70s.  She later formed Buckingham Nicks with her musical, and then romantic, partner Lindsey Buckingham.  After hearing one of their songs, Fleetwood Mac founder Mick Fleetwood asked Lindsey to join the band.  Advising Mick that he and Stevie came together as a package, the band relented, and welcomed the two new members on board.
As part of Fleetwood Mac, Stevie sang lead on many of their biggest hits, including "Dreams" (number 4, October 2020 after originally peaking at number 19 in August 1977), "Rhiannon" (number 13, September 1976), "Gypsy" (number 17, November 1982) and "Seven Wonders" (number 23, August 1987).
While remaining part of Fleetwood Mac, Stevie released her first solo album Bella Donna (number 1, September 1981) in 1981.  Stevie's first 'solo' single, "Stop Draggin' My Heart Around" (number 10, September 1981), was actually a duet with Tom Petty and The Heartbreakers.
"Edge of Seventeen", which was titled "Edge of Seventeen (Just Like the White Winged Dove)" for its US release, was the second single issued from Bella Donna in Australia.  In North America, "Leather and Lace" (number 68, March 1982), a duet with Don Henley, was released as the album's second single, instead, with "Edge of Seventeen" becoming the album's third single in 1982.
"Edge of Seventeen" was written by Stevie in response to the death of John Lennon and her uncle Jonathan in the same week, in December 1980.  The song's title came from the way Tom Petty's wife pronounced the phrase 'age of seventeen', with her thick Southern accent, when telling Stevie how she and Tom met.
For reasons I cannot explain, "Edge of Seventeen" missed the top 100 singles chart in Australia.  Even though I was only 2-3 years old, I remember this song receiving quite a bit of airplay, so lack of exposure cannot account for this.  A music video was filmed for "Edge of Seventeen", embedded below, but was not released at the time.  Perhaps the lack of a music video to promote the single hindered its success?  Another factor may be that it is not easy to guess the song's title, as it does not appear in the chorus.
Internationally, "Edge of Seventeen" also failed to chart anywhere in Europe upon its 1981-2 release.  That being said, it is number 86 this week on the UK singles chart - though I do not know why.  The single fared better in North America, reaching number 11 (on the edge of the top 10!) on the US Billboard Hot 100 in April 1982, and also number 11 in Canada.
"Edge of Seventeen" would eventually have some form of local chart success, when its distinctive guitar riff was sampled prominently in Destiny's Child's "Bootylicious" (number 4, July 2001) in 2001.  Although the riff was played by Waddy Watchtel, and not on an acoustic guitar, Stevie makes a cameo playing along to the riff with an acoustic guitar in the "Bootylicious" music video.
Stevie will bubble under again in 1983.
Next post (23 November): There were no new bubbling under entries that missed the top 100 for the next two weeks.  On 23 November, we will see three new songs bubbling under the top 100.
< Previous post: 26 October 1981                                       Next post: 23 November 1981 >
Posted by Bubbling Down Under at 00:02