Of the three acts peaking outside the Australian top 100 this week 40 years ago, two are regarded as electronic music pioneers, and the other achieved commercial success by incorporating elements of electronic music into their otherwise 'rock' sound.  Two of this week's debuts were also the only single released from their accompanying albums.  Shall we take a look? 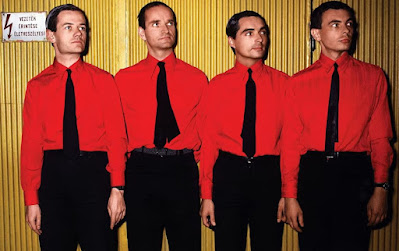 Kraftwerk: calculators are for dummies.
Beyond the top 100:
Position 32 "Pocket Calculator" by Kraftwerk
Highest rank: 14th
Peak date: 19 October 1981
Weeks on below list: 4 weeks
German electronic music pioneers Kraftwerk formed in Düsseldorf in 1969, although the band was initially just singer and keyboardist Ralf Hütter and multi-instrumentalist and backing singer Florian Schneider.
While their first two albums Kraftwerk and Kraftwerk 2 were moderate successes in their homeland, the group's major commercial breakthrough came in 1975, with the release of their fourth album Autobahn.  The album peaked at number 9 in Australia in August 1975, and the album's title track reached number 30 during the same month, becoming Kraftwerk's highest-peaking single in Australia.
Kraftwerk would not land a second top 100 single in Australia until "The Model", backed with "Computer Love" (my favourite Kraftwerk track), peaked at number 33 in May 1982.  This single topped the UK singles chart in February 1982.
In the interim years, Kraftwerk placed another two albums on the Kent Music Report albums chart, with Radio-Activity reaching number 96 in February 1976, and The Man Machine peaking at number 56 in September 1978.  Another album, 1977's Trans Europe Express did not chart in Australia until its 2003 re-issue, when it reached number 437 on the ARIA albums chart in February 2003.
Computer World, the album containing "Pocket Calculator" and "Computer Love", peaked at number 51 in Australia in October 1981.
In its German language incarnation as "Taschenrechner", which just translates as 'calculator', "Pocket Calculator" peaked at number 63 in West Germany in July 1981.  The single reached number 30 in the UK in May 1981.  Check out this unusually-animated-for-Kraftwerk live Austrian TV performance of the track.
Although "The Model" became a big hit for the band in 1982, it had actually been released four years earlier on the album The Man Machine, suggesting that Kraftwerk's sound really was ahead of its time.  Even today, the band's recordings from this era sound somewhat futuristic, as do some of the themes explored in the lyrics.
The success of "The Model" as a single in 1982 spurred The Man Machine to re-enter the Australian top 100 albums chart, reaching number 65 in June 1982, falling short of its peak of number 56 in 1978.
Kraftwerk would only land one other top 100 single in Australia, with "Tour de France" (number 60, September 1984).  They will bubble under a few times again, though, in the 1990s and 2000s, with the next occasion being in 1991.
Two Kraftwerk singles I enjoy that were released in Australia but did not chart locally are "Radioactivity" (1976) and "Musique Non Stop" (December 1986).
Kraftwerk founding member Florian Schneider passed away from cancer in April 2020, aged 73.
Position 34 "She's Got Claws" by Gary Numan
Highest rank: 14th
Peak dates: 26 October 1981 and 2 November 1981
Weeks on below list: 4 weeks
From one electronic music pioneer to another, English artist Gary Numan first came to fame as the lead singer for Tubeway Army.  Their single "Are 'Friends' Electric?" peaked at number 12 in Australia in October 1979.  It was swiftly followed by Gary's debut solo single "Cars", which reached number 9 in Australia in January 1980.  Although "Cars" and Gary's later singles would be credited solely to him, Gary retained the same musicians as in Tubeway Army, and it was essentially the same band, in which Gary was the singer, songwriter and producer.
While Gary had an enduring chart career in the UK, notching up 23 top 40 singles - 6 of which made the top 10, in Australia, Gary landed only two other top 100 hits - "We Are Glass" (number 15, July 1980) and "I Die: You Die" (number 86, October 1980).  Gary had slightly more success on the Australian albums chart, with five albums registering within the top 100 between 1979 and 1985; although none of these peaked higher than number 24.
"She's Got Claws" was the only single lifted from Gary's third studio album Dance (number 85, October 1981).  "She's Got Claws" peaked at number 6 in the UK in September 1981, and at number 12 in Ireland during the same month.
Gary still records and releases new albums, with his twenty-first studio album Intruder peaking at number 78 on the ARIA albums chart in May 2021.
Position 42 "The American" by Simple Minds
Highest rank: 42nd
Peak date: 12 October 1981
Weeks on below list: 1 week
Simple Minds formed in Glasgow in 1977.  Although they would later be known as a stadium rock band, at this point in their career, Simple Minds were incorporating elements of electronic music into their sound.
Simple Minds landed a few minor UK singles chart entries between 1979 and 1981, but none of these peaked higher than number 47.  Surprisingly, Simple Minds landed their first top 40 single anywhere in the world in Australia!  "Love Song" (number 17, February 1982) entered the Australian top 40 on 25 January 1982, which was almost three months prior to their first UK top 40 single, and a couple of weeks before "Sweat in Bullet" entered the Swedish chart.  Performing "Love Song" on the iconic Australian music television program Countdown no doubt helped with the band's earlier Australian chart success.
But prior to "Love Song", "The American" was the sole single from Simple Minds' fourth studio album Sister Feelings Call, which was later combined with their following album Sons and Fascination (number 31, February 1982).  "The American" became the band's first single to almost register on the Australian chart.  "The American" peaked at number 59 in the UK in May 1981.
Interestingly, Simple Minds had greater singles chart success in Australia than in the UK during the synth-pop period of their career, with singles such as "Love Song", "Promised You a Miracle" (number 10, July 1982) and "Glittering Prize" (number 9, October 1982) achieving higher peaks locally than in their homeland, where they peaked at numbers 47, 13 and 16, respectively.
We shall next see Simple Minds bubble under in 1984.
Next week (19 October): Another three singles bubbling below the top 100.
< Previous post: 5 October 1981                                   Next post: 19 October 1981 >
Posted by Bubbling Down Under at 00:00