After last week's mammoth post containing ten new debuts, this week is a more sedate affair, with only two new top 150 entries.   A common thread running through this week's debuts is that three of the four songs are from artists whom we have already seen this year.  Let's take a look at them. 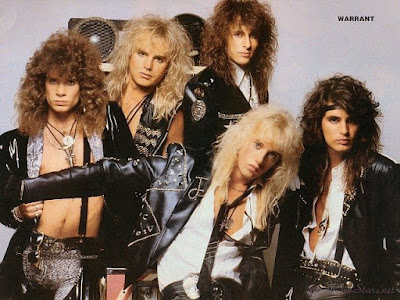 Warrant: Dirty rotten filthy stinking rich?  Not with these Australian chart placings.
Top 150 debuts:
Number 127 "Beautiful Love" by Adeva
Peak: number 109
Peak date: 23 April 1990
Weeks in top 150: 7 weeks
Weeks on chart: 8 weeks
Adeva, real name Patricia Daniels, has previously bubbled under twice, with "Respect" and "Musical Freedom (Free At Last)", and here she is again, with the fifth single from her debut album Adeva! (number 14, February 1990).
Unusually for a dance artist, Adeva's album charted much better than the singles lifted from it - a feat that was replicated in the UK, where the album peaked at number 6 in September 1989 - 11 places higher than any of the singles lifted from it.
Unlike the previous four uptempo singles, "Beautiful Love" is a ballad.  This soulful song about lurve was quite a change in style for Adeva, but she pulled it off convincingly.  Not that the record-buying public was sold on it, however, as this single also majorly underperformed in the American diva's prime market, the UK, where it stalled at number 57 in December 1989.  Perhaps most people who liked the song already owned the album.
Frustratingly, "Beautiful Love" missed the national top 100 despite reaching the top 100 on four of the five state charts, peaking highest at number 84 in South Australia/Northern Territory.  "Beautiful Love" also performed better on the Australian Music Report singles chart, where it reached number 88.
A sixth single from Adeva!, "Treat Me Right", was issued locally in July 1990, but failed to chart.  It did manage to peak at number 62 in the UK, however, in April 1990.
We will see Adeva again in 1992.
Number 148 "Tender Lover" by Babyface
Peak: number 144
Peak date: 9 April 1990
Weeks in top 150: 2 weeks
Weeks on chart: 3 weeks
Babyface, real name Kenneth Brian Edmonds, bubbled WAY down under in February with "It's No Crime", and here he is with the second single and title track from the Tender Lover album (number 143, May 1990).  Bobby Brown, who Babyface had written and produced for, appears as the featured rapper on this track, to boot.
"Tender Lover" performed much stronger in Babyface's native US, where it peaked at number 14 in February 1990.
We will next see Babyface (as the performing artist) in 1992.
Bubbling WAY down under:
Number 159 "Get Busy" by Mr. Lee
Peak: number 159
Peak date: 26 March 1990
Weeks on chart: 1 week
Although I was only 12, had I been living in Sydney and a regular reader of The Sydney Morning Herald newspaper at the time, I might have seen this article from 21 December 1990, written by Helen Marie Dickenson, reviewing her top 10 favourite dance tracks of 1990.  In it, this song by Mr. Lee is listed, along with its ARIA chart peak of number 159 (Spoiler alert: there is a peak outside the top 100 listed for another song from later in the year in the article).  Had I seen this article at the time, I would have been clued in to the fact that the ARIA chart extended beyond number 100 - something I did not discover until 2014!
Anyway, back to the song at hand... Mr. Lee, real name Leeroy Haggard Jr., is an American rapper, hailing from Chicago, who was one of the pioneers of hip-house, merging rap and house music together.  While Mr. Lee had released a string of singles on minor labels dating back to 1986, "Get Busy" was his debut release for Jive Records, and the title track from his debut album Get Busy.
"Get Busy" was a top 20 hit in Germany, the Netherlands and Belgium, and also registered in the top 50 in the UK and New Zealand.  It also peaked at number 2 on the very dubious US Billboard Dance chart.
While Mr. Lee never scored a top 100 hit in Australia, he will dent the top 150 in September 1990.
Number 161 "Sometimes She Cries" by Warrant
Peak: number 161
Peak date: 26 March 1990
Weeks on chart: 1 week
Warrant have graced our presence twice previously, with "Down Boys" and "Big Talk".   "Sometimes She Cries" was the fourth and final single lifted from Warrant's debut album, Dirty Rotten Filthy Stinking Rich (number 72, November 1989).  As you might have guessed from the title, it's not one of their more 'rockin'' tracks, though it still has some trademark late 80s hair metal guitar licks on it.
"Somtimes She Cried" performed much better in the band's native US, where it peaked at number 20 in March 1990.
Warrant will next pay us a visit in 1992.
Next week (2 April): four new top 150 debuts, including one from a band who've been around since the 60's, and another from a band who would have to wait until 1996 to score their only real hit in Australia.  There is also one bubbling WAY down under entry.  You can also follow my posts on instagram, facebook and twitter.
< Previous week: 19 March 1990                                              Next week: 2 April 1990 >
Posted by Bubbling Down Under at 00:28