This week, there are a measly two new top 150 debuts.  One thing they have in common is that they're both by duos - except one of the duos was once a four-piece group.  Let's take a look... 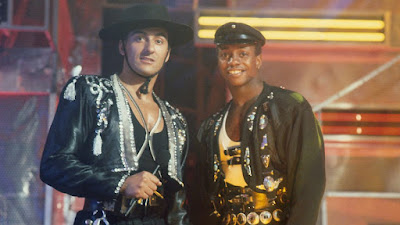 London Boys: What you might get if Zorro, the Village People and the Umbilical Brothers had a child.


Number 123 "One Better World" by ABC
Peak: number 122
Peak date: 11 September 1989
Weeks in top 150: 7 weeks
Weeks on chart: 7 weeks
ABC burst onto the Australian charts in 1982 with back-to-back top 10 hits "Poison Arrow" (number 4, August 1982) and "The Look of Love" (number 7, October 1982).  Since then, it was all downhill for them in terms of commercial success, with only two further top 30-peaking hits - the last of which was "When Smokey Sings" (number 25, October 1987).  The group of originally four members quickly disintegrated, leaving only lead singer Martin Fry and Mark White, joined by new member 'Eden' (whose voice wasn't actually used on recordings) for their third album, released in 1984.  In between their third and fourth albums, Martin Fry underwent successful treatment for Hodgkin's lymphoma, which had reportedly reached a life-threatening stage.

Two of my favourite ABC singles missed the top 100 altogether down under: "How to Be a Millionaire" (though it came close, placing second on a list of 'singles receiving significant sales reports beyond the top 100' in March 1985), and "King Without a Crown" (released locally in January 1988).

Roll on to 1989, ABC were now just Martin and Mark, and "One Better World" was the lead single from their fifth album, Up (number 132, December 1989).  "One Better World" was a modest number 32 hit in the UK in June 1989, becoming the group's final top 40 single in their homeland.  A second single lifted from the album, "The Real Thing", peaked at number 68 in the UK in September 1989, but failed to chart in Australia, where it was released in late November 1989.

Despite the lack of success, ABC will join us for one last time in 1990.

Based in Hamburg but met-in-London London Boys were Edem Ephraim and Dennis Fuller, whose act incorporated dancing, gymnastics, backflips and... going by the videos, silly dress-ups.  Written and produced by Ralf René Maué (who also wrote flop singles for Sinitta and Samantha Fox), "Requiem" stalled at number 59 in the UK in December 1988 upon initial release, before being beefed up a little bit by Pete Hammond (from the Stock Aitken Waterman Hit Factory), and rebounding to number 4 on the UK chart in May 1989.  Parent album The Twelve Commandments of Dance was also a success in Britain, peaking at number 2 on the albums charts.  In Australia, it was a different story, where this single barely scraped the top 150, and the album peaked at number 137 in August 1989.

Tragically, the London Boys were both killed in a car accident in the Austrian Alps in January 1996, aged 36.  Ephraim's wife and a DJ friend, who were passengers, and the driver of the other vehicle, were also killed in the crash.  Both London Boys were survived by children.

On a brighter note, although they never landed a top 100 hit in Australia, London Boys will visit us twice more in the coming years, with the next occasion being in December 1989.

Next week (11 September): Three new top 150 debuts, including the original version of a minor hit from 1992; plus two bubbling WAY down under entries.  You can also follow my posts on facebook and instagram.