Once again, I am at a loss to find a common thread among this week's new entries, so let's just dive straight in... 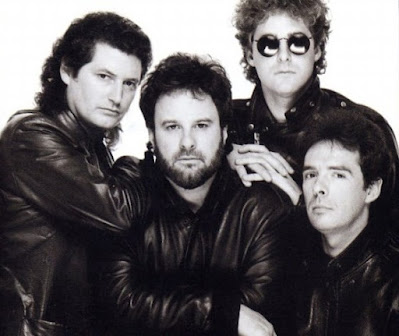 The Call: It's probably not that surprising that one of these guys fathered the leader of the Black Rebel Motorcyle Club.


Number 134 "Let the Day Begin" by The Call
Peak: number 111
Peak date: 27 November 1989
Weeks in top 150: 11 weeks
The Call were an American band, hailing from California and formed in 1980.  They scored a solitary hit down under in 1983 with "The Walls Came Down", which spent three non-consecutive weeks at its peak of number 21 in July and August of that year.  In fact, "The Walls Came Down" was a much bigger hit in Australia than anywhere else - it only peaked at number 74 in their homeland, and didn't chart anywhere else, as far as I am aware.

Fast forward to 1989, and "Let the Day Begin" was the lead single and title track from the album of the same name - the band's sixth, which peaked at number 138 in Australia, in October 1989.  "Let the Day Begin" peaked at number 51 on the US Billboard Hot 100 in August 1989, and number 42 in the UK in October 1989.  In Australia, it couldn't give the band a belated, second top 100 entry, although it did manage to perform better on the Australian Music Report chart, where it peaked at number 74 (though didn't enter the top 100 until November).  Despite its lower peak on the ARIA chart, "Let the Day Begin" did manage to spend a decent amount of time on the chart... for a single peaking outside the top 100.  That's got to count for something, right?

Sadly, lead singer Michael Been, who is the father of Black Rebel Motorcycle Club's (the group) frontman, passed away in 2010, aged 60.

Another group formed in California, this time in Los Angeles - in 1977, are Great White, who made their first appearance on the ARIA singles chart this week in 1989 with "Once Bitten Twice Shy".  The track was originally performed by Ian Hunter in 1975, and peaked at number 29 (though spent 30 weeks in the top 100) in Australia in September of that year.  A cover version by Australian band The Angels became a number 43 hit locally in February 1992.

Great White's version of "Once Bitten Twice Shy" gave the song a rockier edge, but it was less successful down under, barely reaching the top 150.  This version had much greater success in the band's homeland, however, where it peaked at number 5 on the Billboard Hot 100 in August 1989.  Their version also also peaked at number 83 in the UK in August 1989.  Great White will pay us another visit in 1991.

Number 145 "Stakker Humanoid" by Humanoid
Peak: number 145
Peak date: 11 September 1989
Weeks in top 150: 1 week
And now for something more modern-sounding, if not exactly tuneful... "Stakker Humanoid" peaked in the act's native UK at number 17, in December 1988.  The track also peaked at number 23 in the Netherlands in January 1989.  As typical at the time, Australia was months behind with catching on to anything futuristic-sounding, like this; although, oddly, the single took more than four months to dent the top 150, having been released in Australia in late April 1989.  The Guardian have described the track as "the first truly credible UK acid techno record to break into the mainstream."  Make of that what you will... although I think surely New Order's "Fine Time" counts (though, granted, it was released two weeks after "Stakker Humanoid" in the UK, despite charting in Australia before it, in January 1989).

Number 160 "The Second Summer of Love" by Danny Wilson
Peak: number 151
Peak date: 30 October 1989
Weeks on chart: 6 weeks
Despite the name, Danny Wilson was actually a band, not a solo artist, originating from Dundee in Scotland.
The group landed one single on the Australian top 100, "Mary's Prayer", which peaked at number 64 in February 1988, though spent 19 weeks on chart.
Unusually, "Mary's Prayer" became a hit in the US, reaching number 23 in September 1987, before it became a hit in the UK, peaking at number 3 there in April 1988 in its third chart run.
"The Second Summer of Love" was the lead single from Danny Wilson's second album Bebop Moptop.  The single peaked at number 23 in the UK in July 1989, and number 52 in Germany in October 1989.
Domestically, "The Second Summer of Love" performed strongest in Western Australia, where it reached number 124.
This track was the band's last single to be released in Australia.  The group released an EP in 1991 before splitting, and lead singer Gary Clark then launched a solo career, landing a minor (number 34) hit in the UK in 1993 with "We Sail on the Stormy Waters".
Number 163 "It's Not Enough" by Starship
Peak: number 163
Peak date: 11 September 1989
Weeks on chart: 1 week

I wasn't aware of Starship releasing anything new after their 1987 smash hit, "Nothing's Gonna Stop Us Now"  (number 3 for 6 weeks in June-July 1987).  Listening to "It's Not Enough" for the first time as I write this post, it sounds quite similar to the Def Leppard/Bryan Adams soft rock sound of the late 80s/early 90s.  I was sure that Mutt Lang must have produced it, but no, it was produced by Mike Shipley and Larry Klein.  One thing immediately evident is that Grace Slick is no longer in the group.  Indeed, this track was lifted from Starship's first post-Slick album, Love Among the Cannibals.  "It's Not Enough" fared better in the US, where it peaked at number 12 in October 1989 (I must have tuned out of American Top 40 to have not heard it), and number 19 in Canada.  "It's Not Enough" was the last charting single for the group in Australia.

Next week (18 September): A bumper edition with 9 new top 150-peaking debuts, and two bubbling WAY down under entries!  Among the new entries next week we will see someone who became better-known for providing the voice of a cartoon character than singing, the initial chart run for a single that would go on to much bigger things in 1990, a remix of a late 70s disco track, and the first Australian chart 'hit' for an artist from Iceland!  Remember, you can also follow my posts on facebook and instagram.