One thing all of this week's debuting acts have in common is that they had patchy success on the Australian charts.  A couple of big hits a decade apart, a one-hit wonder with (much) greater success in movies, an artist who had more success as a jingle writer, and a relic from the 1950's - we've got 'em all this week.  So let's take a look... 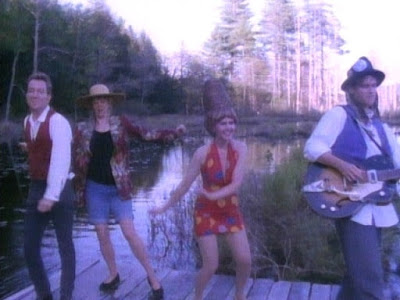 The B-52's morph into The CFC-52's with this track... though I wonder how many CFC's were released with all that hairspray?

One thing that annoys me is when a band name is not consistent across their releases.  Sometimes a band name has a The at the front of it; other times it doesn't.  Or, even worse, the sleeve artwork says one thing, but the disc says another.  Consistency, please!  Here, case in point, we have Public Image Limited - or Public Image Ltd, P.I.L, or PiL - take your pick!  On this release, the band - fronted by former Sex Pistol John Lydon a.k.a. Johnny Rotten - are billed as Public Image Ltd... on the sleeve, but P.I.L. on the vinyl label and CD.  Do you see why I find this so infuriating?  Now, onto the music in question, up until now, P.I.L. (or whatever you want to call them) had placed two singles on the Australian chart, the biggest of those being "This is Not a Love Song" (number 17, January 1984).  "Warrior" was the second single lifted from the album 9 (number 57, August 1989), and peaked at number 89 in the group's native UK.  Public Image Ltd will join us again in 1990, though under the name Public Image Limited.  See what I mean?

Patrick Swayze hit the big time as an actor towards the end of 1987, with the phenomenal success of the movie Dirty Dancing and its accompanying soundtrack.  Patrick also tried his hand at singing, and scored a top 10 hit with "She's Like the Wind" (number 6, April 1988).  While Patrick is generally thought of as being a one-hit wonder when it comes to the charts, it didn't matter so much, as music was not his raison d'être - in fact, he never released an album.  It may then surprise some readers to know that he scored a second 'hit' - of sorts - on the Australian charts with this track, another movie tie-in, from the Road House soundtrack (number 43, July 1989).  "Raising Heaven (In Hell Tonight)" also registered on the Swiss charts, where it peaked at number 30 in August 1989.  Patrick, of course, passed away in 2009, aged 57.

The B-52's scored two decent-sized hits in Australia in 1980 with "Rock Lobster" (number 3, May 1980) and "Private Idaho" (number 11, September 1980); but no other single they had released up until now had peaked higher than number 43 on the Australian charts.  Their last charting single down under was "Summer of Love" (number 90, December 1986), and they hadn't troubled the top 40 locally since 1980.  Fast forward to 1989, the group had since lost guitarist Ricky Wilson to AIDS in 1985, and their previous fun-loving, party image had been replaced by a more 'serious', politically conscious one... at least for this single.  Somewhat prophetic, "Channel Z" touched upon the brainwashing nature of dedicated 24-hour TV news channels (which weren't a thing in Australia until 2009), getting all of your 'news' from one source, and the looming environmental catastrophe. Thirty-one years later, we seem to be in a much worse state with these things.

The lead single from their Cosmic Thing album, "Channel Z" didn't exactly set the charts alight.  The only other place it charted in 1989 was in the Flanders region of Belgium, where it peaked at number 43 in September 1989.  In Australia, "Channel Z" performed strongest on the South Australia/Northern Territory state chart, where it peaked at number 78.  This pattern of doing best in South Australia/Northern Territory was evident across all of the singles issued from Cosmic Thing - perhaps most strikingly when "Love Shack" debuted at number 101 nationally, but at number 7 on the SA/NT state chart!  Cosmic Thing also topped the SA/NT state chart in December 1989; a month before it reached number 1 nationally.

"Channel Z" was re-issued in 1990 in several countries, including Australia (in September 1990), after the success of "Love Shack" (number 1, December 1989), "Roam" (number 11, March 1990), and... er, "Deadbeat Club" (number 73, April 1990), but did not re-enter the top 150 again.  The 1990 release of the single registered on the UK charts, however, peaking there at number 61 in August of that year.  "Channel Z"'s lack of success surprises me, as it seemed to get the group back on the radar - I caught the video on Countdown Revolution several times, and songs about the environment seemed to be topical in 1989.  Nevertheless, the single propelled Cosmic Thing to number 62 on the ARIA albums chart in September 1989, before its ascent to number 1 in January 1990, following the success of "Love Shack".

I have previously written about this one, in my special post on singles peaking at number 101.  OK, you may be asking 'why is a song from 1957 on this list?'  Well, "Great Balls of Fire" was re-recorded to coincide with the release of the biopic film about Jerry Lee Lewis, Great Balls of Fire!, where Dennis Quaid plays the leading role.  This issue of the single performed particularly well in New Zealand, where it peaked at number 8 in September 1989.  For once, I think us Aussies showed better taste in not making it a hit again.

This track was the third and final single lifted from Stephen's A New Kind of Blue album (number 53, March 1989).  Stephen was technically the first artist I saw live in concert, as the support act on the Australian leg of Tori Amos' Under the Pink tour, in December 1994.  To date, Stephen had only landed two solo top 40 hits since The Sports disbanded in 1981; and the last of those was in 1984.  Stephen, of course, had notable success as a jingle-writer for TV commercials, such as this Medibank Private one, which still occasionally pops into my head, 30 years later...  If only some of Stephen's jingles had been singles!  We will see Stephen again numerous times in the coming years, with his next visit being in 1991.