As I sat down to write this post, it occurred to me that I know nothing about the acts bubbling under the Australian top 100 this week in 1981.  Let's get enlightened together! 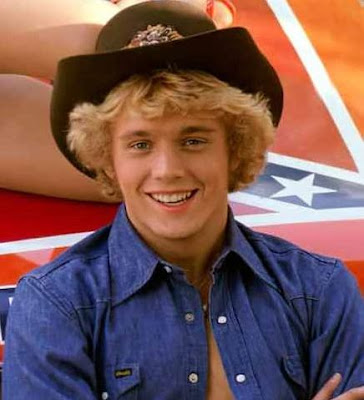 John Schneider: that hair was probably a fire 'hazzard'.
Beyond the top 100:
Position 22 "Fool in Love with You" by Jim Photoglo
Highest rank: 8th
Peak date: 31 August 1981
Weeks on below list: 7 weeks
James G. Photoglou, using the slightly modified stage name of Jim Photoglo, is a pop and country musician hailing from Los Angeles.  "Fool in Love with You" was the title track and lead single from Jim's second studio album Fool in Love with You.
"Fool in Love with You" reached number 25 on the US Billboard Hot 100 in July 1981, becoming Jim's second and biggest pop hit there.  The single was Jim's only release to (sort of) chart in Australia.
While Jim may have experienced only moderate success as a recording artist in his own right, he went on to become a successful country music songwriter in Nashville.  Jim has written songs recorded by Garth Brooks, Faith Hill and Dusty Springfield, among others.

The music video for "Fool in Love with You", embedded below, is a perfect time capsule of the early 1980s.  It looks like the assistant principal at my high school was taking fashion tips from Jim in this video, sporting a very similar hair style and moustache over a decade later.
Position 25 "Dead Or Alive" by John Cale
Highest rank: 9th
Peak dates: 3 August 1981 and 10 August 1981
Weeks on below list: 5 weeks
Welsh musician John Cale was a founding member of American group The Velvet Underground.  John's only release to dent the top 100 in Australia was the album Songs for Drella (number 100, July 1990), which was a collaboration with fellow Velvet Underground member Lou Reed.
"Dead Or Alive" was the opening track on John's seventh solo studio album Honi Soit.
I didn't enjoy this one, but the music video is another interesting snapshot of the early 80s.
This would be John's only single to 'chart' in Australia.
Position 26 "It's Now Or Never" by John Schneider
Highest rank: 20th
Peak dates: 27 July 1981 and 3 August 1981
Weeks on below list: 6 weeks
John Schneider is best known for his role as Beauregard "Bo" Duke in the American TV series The Dukes of Hazzard, which I used to watch with my mother in kindergarten, but remember very little about now.
Sounding much older than his 21 years on this recording, to my ears, "It's Now Or Never" was a cover version of a song recorded by Elvis Presley in 1960.  John's rendition of the track peaked at number 14 on the US Billboard Hot 100, and number 49 in New Zealand in September 1981.
As with the other two new entries this week in 1981, John would not trouble the Australian charts again.
Next week (27 July): Another three new entries, one of which would eventually go on to become a big hit in Australia in 1982.
< Previous week: 13 July 1981                                                Next week: 27 July 1981 >
Posted by Bubbling Down Under at 17:41