This week in 1991's debuts peaking outside the top 100 are unusual in that only one of them peaked within the top 150.  Let's take a look at them. 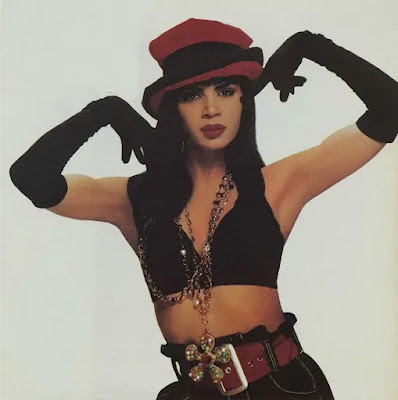 Corina: not many record buyers in Australia were 'tempted' to buy this one.
Top 150 debuts:
Number 146 "Something Special" by Nomad
Peak: number 146
Peak date: 2 December 1991
Weeks in top 150: 1 week
Weeks on chart: 3 weeks
British house music act Nomad consist of Damon Rochefort (the band's name is Damon backwards) and Steve McCutcheon, with guest rappers and singer Sharon D. Clarke on vocals.  Their debut single "(I Wanna Give You) Devotion" (number 37, August 1991) took four and a half months to creep into the top 40 in Australia for a solitary week.  They followed it up with "Just a Groove" (number 76, September 1991).
"Something Special" was issued as the third and final single from Nomad's only album Changing Cabins (number 105, August 1991).  Internationally, the single peaked at number 73 in the UK in September 1991, number 15 in the Netherlands in November 1991, and number 43 in the Flanders region of Belgium in November 1991.  "Something Special" also reached number 37 on the US Billboard Dance Club Songs chart.
Within Australia, "Something Special" was biggest in New South Wales/Australian Capital Territory, where it reached number 136.
I didn't know this one at the time, but like it.
We'll see Nomad again in 1992.  Steve McCutcheon went on to write and produce for other artists, including Westlife and Ed Sheeran.  Steve also became part of the band Undercover, whom we'll see in 1993.  Sharon D. Clarke has acted in numerous movies and TV programs, including Doctor Who.
Bubbling WAY down under:
Number 153 "Spiritual High (State of Independence)" by Moodswings featuring Chrissie Hynde
Peak: number 153
Peak date: 2 December 1991
Weeks on chart: 3 weeks
British duo Moodswings were Grant Showbiz and James F. T. Hood.  Pretenders front woman Chrissie Hynde provided vocals on their debut album Moodfood (number 178, March 1993).  We last saw Pretenders in November 1990.
"Spiritual High (State of Independence)" is a cover version of a song originally recorded by Jon and Vangelis.  Moodswings' version initially peaked at number 66 in the UK in October 1991, before re-entering the chart in early 1993, reaching a new peak of number 47 in January 1993.
On the ARIA state charts, "Spirtual High (State of Independence)" performed strongest in Western Australia, where it reached number 132.
Number 160 "The Rivers of Belief" by Enigma
Peak: number 160
Peak date: 2 December 1991
Weeks on chart: 4 weeks
We last saw Enigma in August 1991.
"The Rivers of Belief" was released as the fourth and final single from Enigma's debut album MCMXC a.D. (number 2, March 1991).  Once again, the track features spoken vocals from Sandra - at least, on the single version... and pan pipes.
"The Rivers of Belief" peaked at number 37 in Sweden in December 1991, and number 68 in the UK in January 1992.
Domestically, "The Rivers of Belief" was most successful in Western Australia, where it reached number 129.
We shall next see Enigma in 1995.
Number 165 "In a Darkened Room" by Skid Row
Peak: number 157
Peak date: 6 January 1992
Weeks on chart: 6 weeks
We last saw American band Skid Row in December 1989.
"In a Darkened Room" was issued as the third single from the band's second album Slave to the Grind (number 3, June 1991) in Australia.  It followed "Monkey Business" (number 31, July 1991) and "Slave to the Grind" (released in Australia in October 1991, did not chart).
Internationally, "In a Darkened Room" peaked at number 27 in Switzerland in October 1991.
Within Australia, "In a Darkened Room" performed strongest in Western Australia, where it reached number 137.
The music video for "In a Darkened Room", which I had not seen before, is interesting for transitioning from a mimed performance to a live one mid-way through.
Skid Row will next join us in 1995.
Number 175 "For You" by Michael W. Smith
Peak: number 175
Peak date: 2 December 1991
Weeks on chart: 1 week
We last saw Michael W. Smith in July 1991.
"For You" was the second and final single released in Australia from Michael's sixth studio album Go West Young Man (released in Australia in July 1991, did not chart).
"For You" peaked at number 60 on the US Billboard Hot 100 in October 1991, and number 65 in Canada during the same month.
On the ARIA state charts, "For You" was most successful in New South Wales/Australian Capital Territory, where it reached number 160.
I hadn't heard this one before.  My first thought was he sounds like a male Amy Grant, with that safe, slick American early 90s adult contemporary pop production.  Checking my previous post with Michael in it, I see I made the same observation last time.  Unlike then, however, Amy does not have a co-writing credit on this track.  The track also reminds me a little bit of Richard Marx.
We'll next seek Michael in 1993.
Number 177 "Whispers" by Corina
Peak: number 160
Peak dates: 16 December 1991, 23 December 1991 and 30 December 1991
Weeks on chart: 4 weeks
American freestyle singer Corina Katt Ayala, known mononymously as just Corina, burst onto the scene in 1991 with "Temptation" (number 57, October 1991), which although not a huge chart success in Australia, peaked at number 6 on the US Billboard Hot 100 in August 1991.
Despite "Temptation" being one of my favourite songs of 1991, I never actually heard any other Corina tracks at the time, and she seemed to disappear back into obscurity as quickly as she'd arrived.  The only other memory of Corina I have from then is that Smash Hits reported she was rumoured to be dating Mark "Marky Mark" Wahlberg.
"Whispers" was issue as the second - and, in Australia, final - single from Corina's only album Corina (number 163, October 1991).  Internationally, "Whispers" peaked at number 51 on the US Billboard Hot 100 in November 1991.
Domestically, "Whispers" was most popular in New South Wales/Australian Capital Territory, where it reached number 148.
"Whispers" was Corina's final release to chart in Australia.  Corina also dabbled in acting, landing some guest starring roles on American TV.
Next week (9 December): Six top 150 debuts and one bubbling WAY down under entry.
< Previous week: 25 November 1991                                 Next week: 9 December 1991 >
Posted by Bubbling Down Under at 00:00