This week in 1989 we have not one, but two obscure Australian bands, as well as an Australian... children's entertainer.  We also have an ex-Go Go who is not Belinda Carlisle or Jane Wiedlin.  Let's take a look... 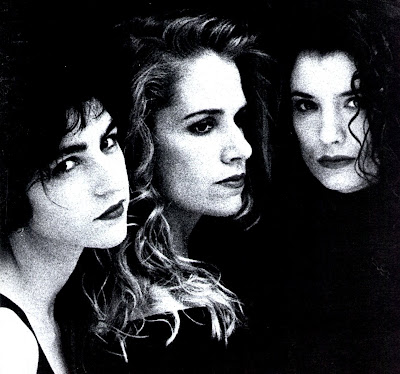 The Graces: Lay down your arms... but not your sultry looks.
Debuts:
Number 125 "Chopsticks" by Peter Combe
Peak: number 125
Peak date: 9 October 1989
Weeks in top 150: 5 weeks
It's not often that children's songs make the national chart.  Just as well, I say.  "Chopsticks" is one of those songs that you might learn to play before/without actually taking piano lessons, which is something I took in my teens - though I was never explicitly taught to play "Chopsticks", it's fairly easy to work out.
Number 141 "Turn to Fantasy" by Ice Tiger
Peak: number 121
Peak date: 23 October 1989
Weeks in top 150: 5 weeks
You know a recording act is pretty obscure and/or an Australian act of yesteryear who had limited success when they don't even have a Wikipedia article, and (as I write this), Ice Tiger don't.  Naturally, I assumed they must therefore be Australian, and that hypothesis was indeed correct.  An act I'd never heard of before getting hold of these charts, Ice Tiger hailed from Perth.  What is interesting about this release is that the group released it independently, as in not on a major (or even an established minor) label.  Such actually 'indie' releases were a rarity on our charts in the 1980s.  An album containing this track, Love 'n' Crime, was also issued independently, peaking at number 142 in October 1991.  "Turn to Fantasy" performed a lot better on the Australian Music Report singles chart, where it peaked at number 63.  Ice Tiger will pay us another visit in November.
Number 146 "Lay Down Your Arms" by The Graces
Peak: number 127
Peak date: 6 November 1989
Weeks in top 150: 5 weeks
The Graces were fronted by former Go-Go's member Charlotte Caffey, and also contained Meredith Brooks (she of "Bitch").  Coincidentally, this track was later covered by former Go-Go Belinda Carlisle for her 1993 album Real.  Belinda's version was also released as a single, and similarly bubbled under on the Australian chart in early 1994!  The Graces' version peaked at number 56 on the Billboard Hot 100, and was lifted from their only album, Perfect View.  This would be the only occasion The Graces 'graced' our charts.
Number 149 "Time and Motion" by Hippos
Peak: number 128
Peak date: 16 October 1989
Weeks in top 150: 7 weeks
Hippos - no "The" on this release, but on their debut album and its singles - were an Australian band who previously scored a minor hit with "Dark Age" (number 45, September 1988).  "Time and Motion" was the lead single from their second album, Hippocalypse (number 101, October 1989).  I didn't think I'd heard this before, but it actually sounds vaguely familiar - I assume, therefore, that it must have received some airplay.  This would be the last time the group troubled the top 150 singles chart.
Bubbling WAY down under:
Number 164 "Be My Baby" by Anita Ward
Peak: number 164
Peak date: 9 October 1989
Weeks on chart: 1 week
Earlier in the year, Collette scored a number 5 hit with a cover of Anita's big (and only) hit from 1979, "Ring My Bell" (number 3, August 1979).  Anita returned with this track, her second 'hit' (?) down under, which didn't chart anywhere else.  I was expecting this to be a cover of the Ronettes' song, but it is an original.  "Be My Baby" does not sound contemporary at all for 1989, and instead sounds like it might have been a contender for the 1983 Flashdance soundtrack.  Surprisingly, Anita will bubble under again... in 1999.
Number 169 "Passionate Kisses" by Lucinda Williams
Peak: number 169
Peak date: 9 October 1989
Weeks on chart: 1 week
Another track that didn't chart anywhere else is this one from Lucinda Williams, who hails from the US.  I am familiar with this one, after it has been chosen by a couple of guest programmers on the Australian music video TV program rage in recent years.  "Passionate Kisses" is lifted from the Lucinda Williams album (number 117, December 1989).  We last saw Lucinda back in August, and she will visit us next in 1992.
Next week (16 October): Three new top 150 debuts, and one bubbling WAY down under entry.  Among them is a new group fronted by an artist who bubbled under less than 6 months ago as a solo artist, and who was also involved behind the scenes on a more-recent top 150 debut.  You can also follow my posts on instagram and facebook.
< Previous week: 2 October 1989                                     Next week: 16 October 1989 >
Posted by Bubbling Down Under at 14:59