Although we only have four new entries this week, three of them have somewhat interesting music videos, involving X-ray specs, video game animation, a band deliberately making it obvious they are miming, and... Maggie Thatcher being dunked into a tank of water.  Shall we take a look? 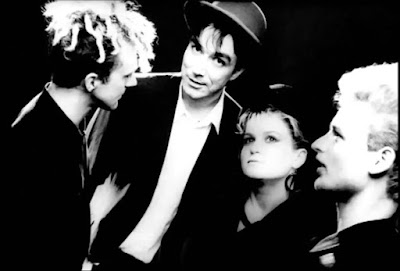 As I write this, I am listening to - and viewing the video for - "The Invisible Man" for the very first time.  I was aware of the single's existence, though, at the time, as my local K-Mart's music department seemed to have bulk-ordered copies of it in, which was always a bad omen.  Other releases my local K-Mart seemed to stock by the truckload included Kim Wilde's Close and Love Moves albums, which peaked at numbers 82 and 126 on the ARIA albums chart, respectively.

The third single released from The Miracle (number 4, June 1989), "The Invisible Man" followed "I Want It All" (number 10, June 1989) and "Breakthru" (number 45, August 1989).  The video for "The Invisible Man" incorporates video game animation and Freddie wears a nifty set of X-ray vision specs.  The single peaked at number 12 in the UK in August 1989, and within Australia performed strongest on the Western Australia state chart, where it peaked at number 79.  Queen will pay us another visit before the year is out.

Number 146 "God Is a Bullet" by Concrete Blonde
Peak: number 146
Peak date: 2 October 1989
Weeks in top 150: 1 week
Weeks on chart: 5 weeks
Concrete Blonde first registered on the Australian singles chart in 1987 with "True", which peaked at number 91 in June of that year.  They wouldn't get their big break until 1990, when "Joey" reached number 2 in August.  "God Is a Bullet" was the lead single from the group's second album Free (number 90, March 1990).  Interestingly, the ARIA chart is the only 'real' (i.e. sales-based) chart that "God Is a Bullet" registered on.  The single performed the strongest on the South Australia/Northern Territory state chart, where it reached number 86.  Concrete Blonde will bubble under again in 1992.
Bubbling WAY down under:
Number 156 "Here Comes Your Man" by Pixies
Peak: number 156
Peak date: 2 October 1989
Weeks on chart: 1 week
American alternative rock band Pixies (no 'The') formed in 1986, and are still going today, although the band split for 11 years in 1993.
"Here Comes Your Man" was the band's first single released in Australia, and is lifted from their second album Doolittle (number 104, August 1989).  In North America and Europe, "Monkey Gone to Heaven" was issued as the first single from Doolittle, but it does not appear to have been released in Australia.
Internationally, "Here Comes Your Man" peaked at number 54 in the UK in July 1989.  It also reached number 3 on the US Billboard Alternative Songs chart, for what that is worth (not a lot in my book).
On the ARIA state charts, "Here Comes Your Man" performed strongest in Queensland, where it reached number 128.
The "Here Comes Your Man" music video is notable for featuring the band's singer, Black Francis (also known as Frank Black - real name Charles Thompson IV), and bassist/singer Kim Deal opening their mouths but not enunciating any of the lyrics when their vocal lines appear.
While Pixies landed seven top 100 albums on the ARIA albums chart to date, with the most recent of those being in 2019, the band never scored a top 100 single on the ARIA chart.
We shall next see Pixies in 1990.
Number 168 "Say No" by Fischer-Z
Peak: number 168
Peak date: 2 October 1989
Weeks on chart: 2 weeks
Fischer-Z, hailing from the UK, were another act having more commercial success in Australia than in their homeland, where their best-charting single, "The Worker", peaked at just number 53 in June 1979.  In Australia, the band were essentially two-hit wonders, eight years apart, with "So Long" (number 15, December 1980) and "The Perfect Day" (number 12, August 1988).  In the time between their two hits, the line-up of Fischer-Z had completely changed, with lead singer John Watts being the only constant.
"Say No" was the first single lifted from the band's Fish's Head (there's a clue on what the band's name means) album, which peaked at number 139 on the ARIA albums chart in October 1989.  While the album reached number 56 in Germany in June 1989, the single failed to chart anywhere else.
The music video for "Say No" is worth noting for the Margaret Thatcher, Ronald Reagan and Colonel Gadaffi real-face look-a-likes being prodded into a tank of water from around 2:50 in, and then having their heads submerged.  Ooh-er!  Fischer-Z will, surprisingly, pay us another visit in 1993.
Next week (9 October): four new top 150 entries, and two bubbling WAY down under debuts.  Among them we have a version of... 'Chopsticks'.  Yes, you read that correctly.
< Previous week: 25 September 1989                                Next week: 9 October 1989 >
Posted by Bubbling Down Under at 00:16